With the summer approaching, EASA has launched the Stronger, Safer, Together Campaign to encourage the Commercial Air Transport community to share and discuss its common safety challenges. Our team participated in several online sessions for which we made our summary. For official materials and videos of the sessions please visit EASA’s website.

Hosted by Mr. John Franklin, EASA made a big effort bringing closer the “hot” topics in aviation safety domain to an online audience which showed up in impressive numbers in each of the sessions. We would like to praise the hard work done by EASA’s team for giving all aviation participants an interesting week!

Our first session we analyzed was session 2: Top Safety Issues and Challenges.

Mr Ben Mami, Head of Safety Risk Management section at EASA, explained to the audience about EASA’s Safety Risk Management System (SRM). The SRM is voluntary and collaborative process at EASA. The main drivers for such system are: collaborative work with the industry experts, identifying safety priorities and connect safety intelligence with actions. EASA also set up the stakeholders inside its SRM including subject matter experts as part of Collaborative Analysis Groups (CAGs) and Advisory Boards. EASA is trying to cover various domains in its SRM including aerodrome and ground handling, ATMs, CAT aeroplanes etc. and other domains such as cyber, conflict zones, COVID-19 etc. The main benefit of EASA’s SRM is its able to determine EPAS (The European Plan for Aviation Safety) and ASR (The Annual Safety Review). EPAS contains the safety priorities and mitigations, acts as SSP at regional level, while ASR measures the safety performance of the European aviation system. Mr Ben Mami continued to show specific safety trends that showed there were no fatal accidents involving EASA Member State’s CAT operators. Also Mr Ben Mami identified a degradation in skills and knowledge in the industry after the initial peak in 2021. Another issue is fatigue which is increasing as the aviation industry is recovering from the pandemic thus making a stress on operators with a huge demand for flights. Aircraft maintenance occurrence rates are on decline and are on level to pre-pandemic period. 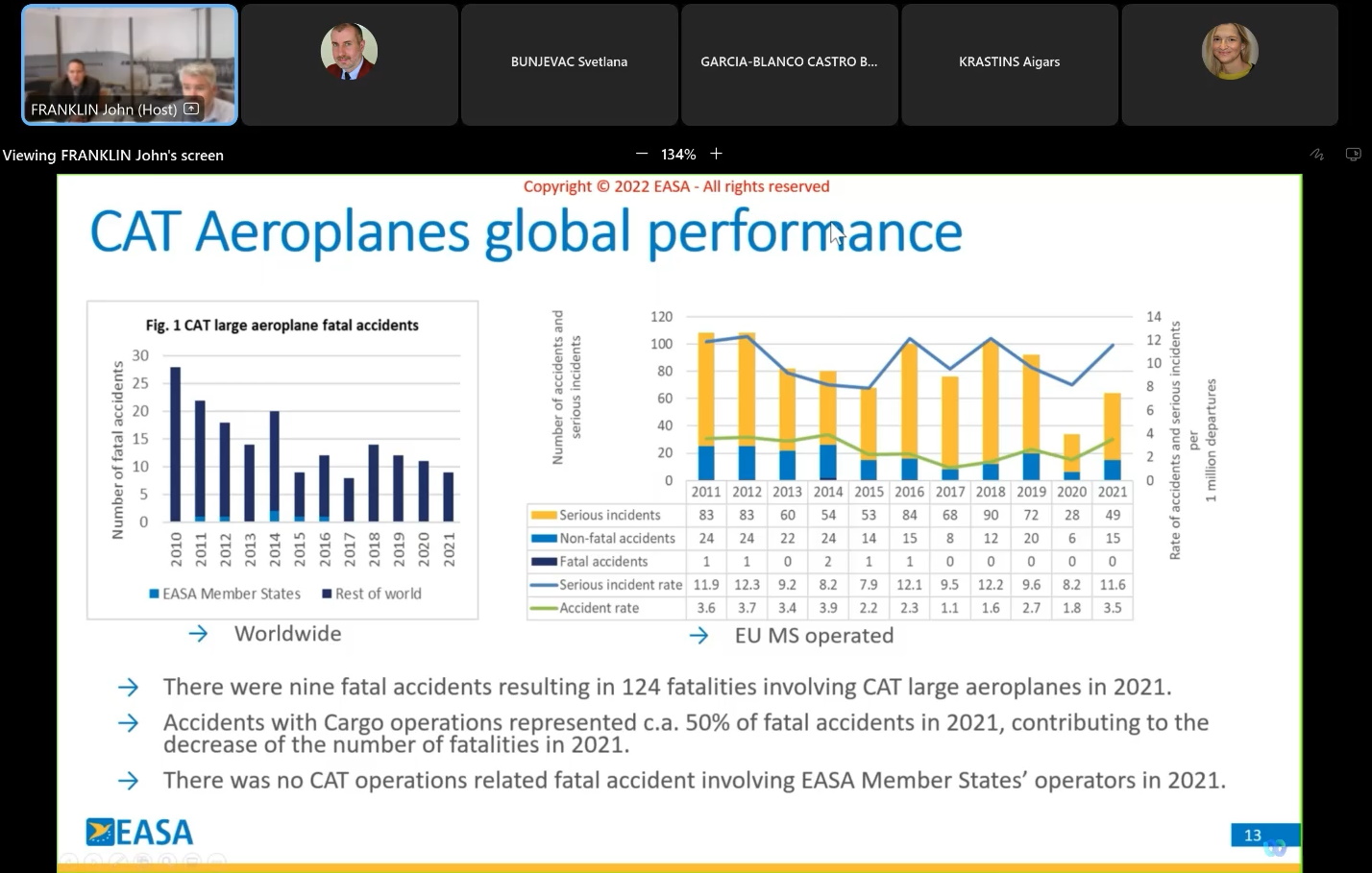 Mr. Krastins, Senior Domain Safety Risk Manager at EASA,  started his presentation with the topic of cyber attacks. Challenge identified is how to cope with the increase with cyber-attacks associated with the conflict with proposed mitigation strategies such as increasing awareness and strengthening IT security infrastructure and staff education. Second topic was increased risk of airspace infringements by military drones or aircraft spilling over from conflict zones where we had witnessed recent example when Soviet-built military drone crashed in the middle of Zagreb, Croatia on 13 March 2022 luckily without any fatalities. The main risks identified in this topic were aircraft collisions while mitigations were civil-military coordination and increased monitoring of buffer zones of conflict zones. Next safety issue was separation with unidentified aircraft which was identified over open waters at Bay of Finland due to conflict. There was traffic with its transponders switched off and unresponsiveness to call from air traffic control which increased the workload on ATC and posing a threat of mid-air collision with civilian aircraft. The mitigation is adjusted procedures for flying over conflict zones. Next safety issue was shortage of operational and technical staff which is a consequence of furloughs due to pandemic. Now there is huge amount of flight cancellation and airport staff shortage as the industry is trying to get back its staff after the pandemic period. Challenge identified is to ensure knowledge transfer as a lot of talented and skillful staff switched industries during the pandemic. The following presented issue was reduced adherence to procedures in the new working environment which is caused by low activity periods during the pandemic that is causing staff becoming complacent and not completely following procedures and/or be less alert. Mitigation is to provide further training to staff, communications campaigns raising the awareness regarding human factors and close monitoring of all related hazards. Finally the last safety issue identified was GPS signal manipulation which is caused by the conflict zones as EASA received reports of distorted GPS signals in countries adjacent to the conflict zones. Mitigation has been proposed in the form of EASA SIB 2022-02 which provided awareness about this issue and recommendation of what should be done if encountered with this issue.

Mrs Pelchen Medwed, domain safety risk manager (ATM/ATS) at EASA, made a nice presentation from the point of view of air traffic management (ATM) and air traffic services (ATS). First mentioned issue was aircraft infringement (SI-2025) .Aircraft infringement increases air traffic involvement and poses a threat of aircraft collision. EASA already proposed several mitigation strategies including a lot of safety promotion and research activities for aircraft infringement reduction. Next issue was conflict detection with closest aircraft (SI-2003) which is ATC induced conflict due to inefficient detection of potential conflict with one of the closest aircraft. Usually happens after an incorrect descend or climb clearance in the context of rapidly developing situation. EASA proposed mitigation such as ATC support tools for conflict detection, training and safety promotion to raise awareness. Next issue was landing, take off or crossing without a clearance (SI-2007) which poses significant runway collision risk. There are existing and proposed mitigations such as implementation of European Action Plan for the Prevention of Runway Incursions version 3.0.

Mrs Renee continued her presentation with aerodrome and ground handling domain. One of the top safety issues was baggage and cargo loading in passenger aircraft (SI-1004). Inadequate management or handling of the baggage and cargo processing that can lead to risks such as aircraft upset, runway excursion or ground damage. Mitigations such as promotion of use of standardized training for ground staff, installation of cameras in cargo holds, regulatory requirements for cargo screening etc. Next issue was unreported events (SI-1038) which is caused due to fear of repercussions, lack of training, priority to do other tasks etc. Mitigations are to raise awareness, develop an industry recognized training program, enforce GSE standards and maintenance programme and promote GSE autonomy and automation. Last mentioned issue was aircraft movement under its own power (SI-1001) where management or handling or aircraft movement under its own power may lead to damage and/or injuries. Mitigations in place such as regulatory requirement for minimum clearances in aircraft movement areas, standardization of application aircraft/vehicle priority rules at aerodromes, extended use of follow-me cars and docking systems etc.

Mrs Bunjevac, HF domain safety risk manager at EASA, demonstrated her top 3 safety issues in the domain of Human Factors. First identified issue was Staff support programmes (SI-3012) for all aviation professionals as they perform safety functions and work under pressure. Mitigation is regulation 965/2012 requirement that operator shall enable, facilitate and ensure access to a support programme that will assist and support flight crew members. Next issue was training effectiveness and competence (SI-3011) which described challenges such as staff retention, effectiveness of basic and refresher trainings for unusual events. EASA is performing research analysis on effectiveness of training methods and raising awareness on training and competence. Last issued identified by Mrs Bunjevac was fatigue and quality sleep (SI-3005). Reduced staffing due to pandemic, use of technology should be used with caution as it must be validated scientifically are challenges facing this safety issue. EASA is performing research and deployed several rule making tasks about this safety issue. 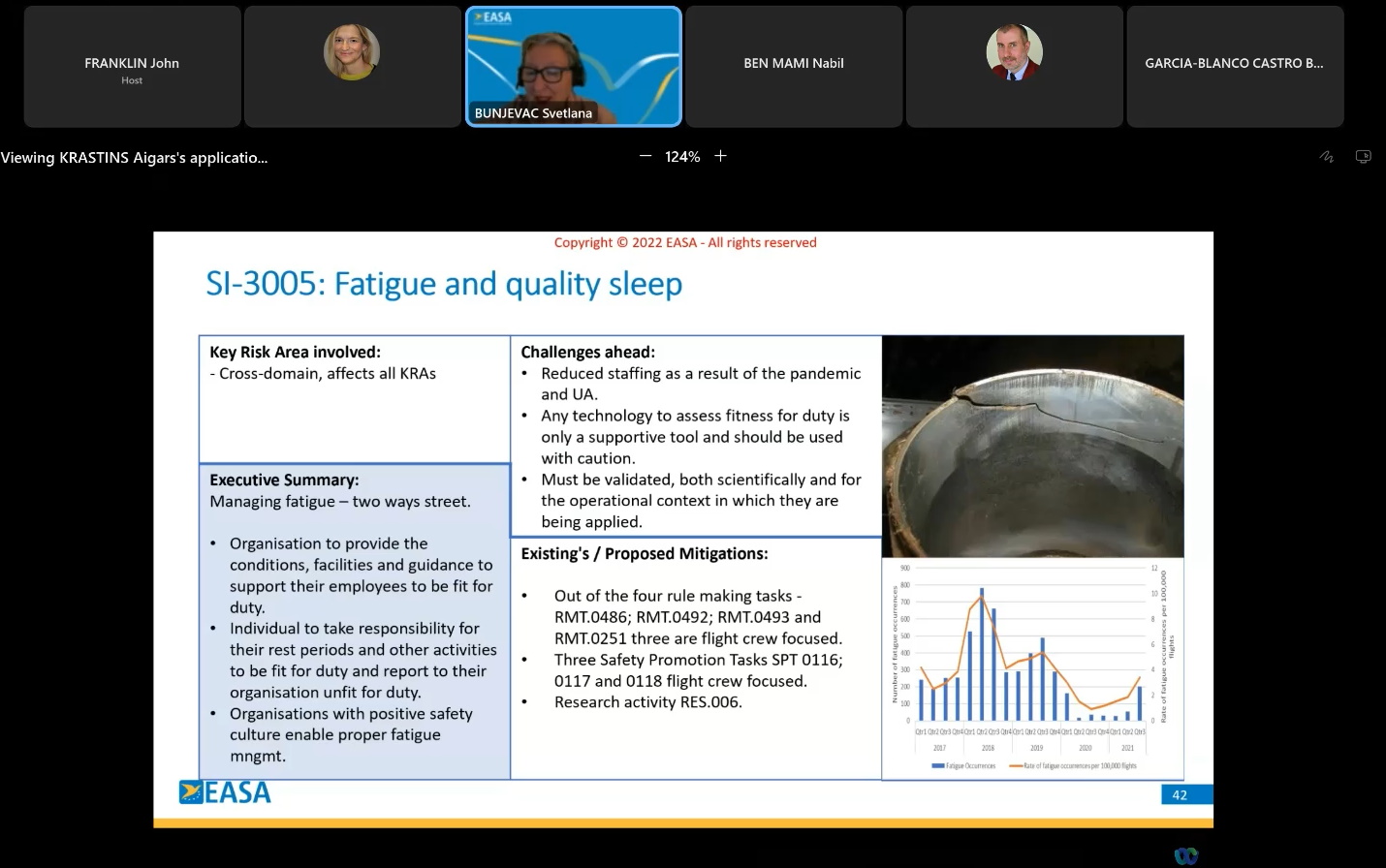 Mr. Blanco Castro, aviation cybersecurity expert at EASA, gave us an overview of cybersecurity risks as he highlighted the complexity of aviation calling it “Systems of Systems (SoS)” and its need for info sharing that can improve the resiliency of aviation systems. However, EASA is involved in many initiatives to protect its member states such as network of cybersecurity analysis where they merge aviation and cybersecurity data in order to analyze cybersecurity events. Mr Borja showed that there is an increase in cyber attacks on airlines (45%) and airports (26%). Most of the attacks are ransomware (26%), threats against data (16%), disinformation or misinformation (10%), email threats (3%) and malware (3%). The majority of attackers are cybercrime actors (65%) with state-sponsored actors (26%). Mr Borja showed examples of Sunwing airline that had a cyberattack which caused them huge delays and cancellations as they had to manually check-in passengers. Another example was ransomware against Zurich airport causing delays and cancellations of flights with weight and balance systems affected by this incident. Also governments and civil aviation authorities are not immune on attacks where Russian civil aviation suffered 70% of data deleted in the attack. Main reasons behind the attacks is earning money and disrupt operations. 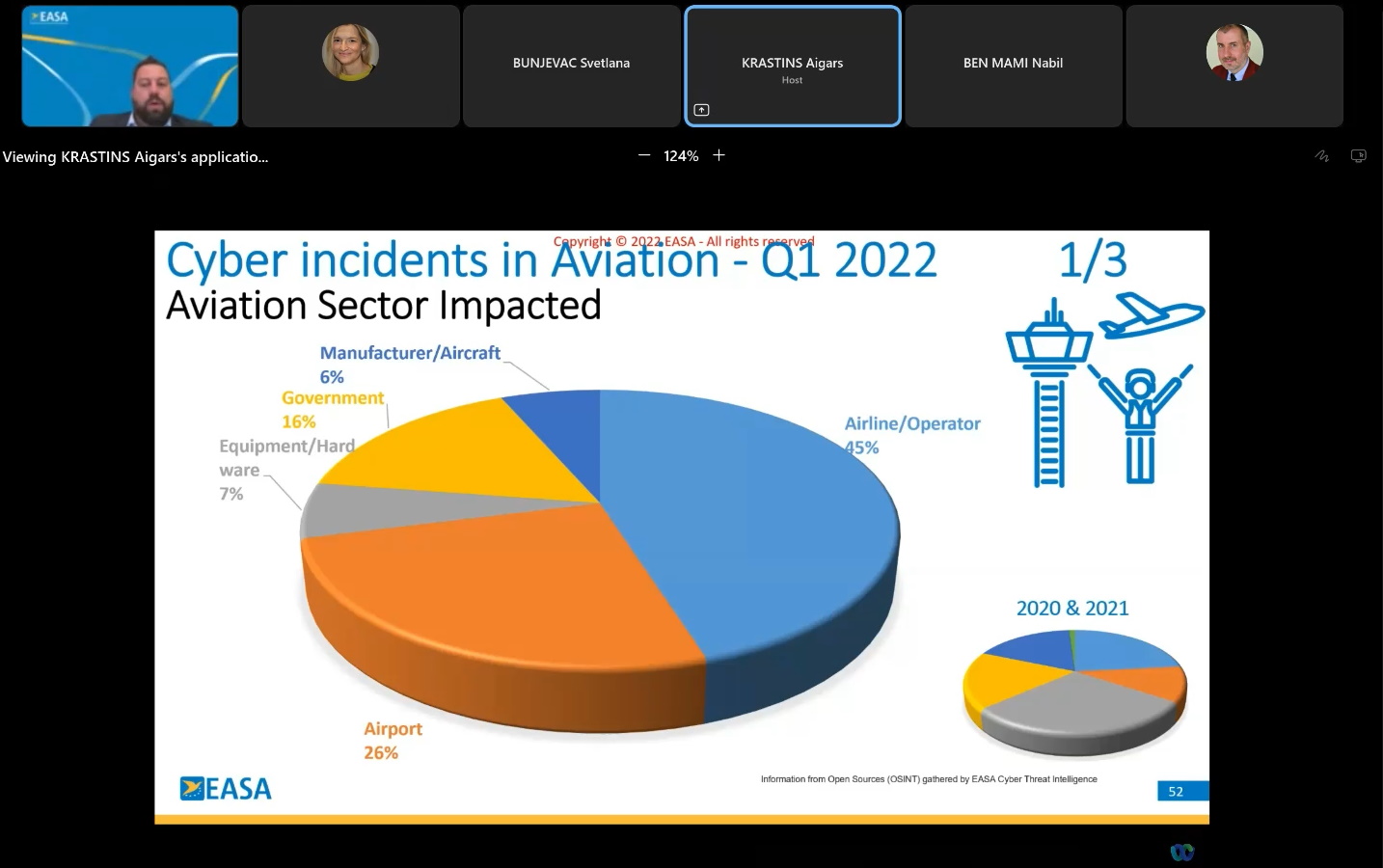 Mr Borkowski, aviation security and intelligence expert at EASA, started the presentation about NoA AVSEC Working group which aim is to investigate and improve the security occurrence and how to leverage data and to improve the analytical capabilities where 10 national authorities are members of the working group. As Mr Borkowski showed there is a steady increase in security occurrences (in 2019 more than 10000 reports provided by the authorities) with a noticeable dip in 2020 due to COVID-19 but 2021 already showing steady increase (almost 6000 reports). 73% reports came from flight operators, 25% by airport operations and 2% by ATM. Some of the security events included interference by lasers, unruly passengers and bomb threats. 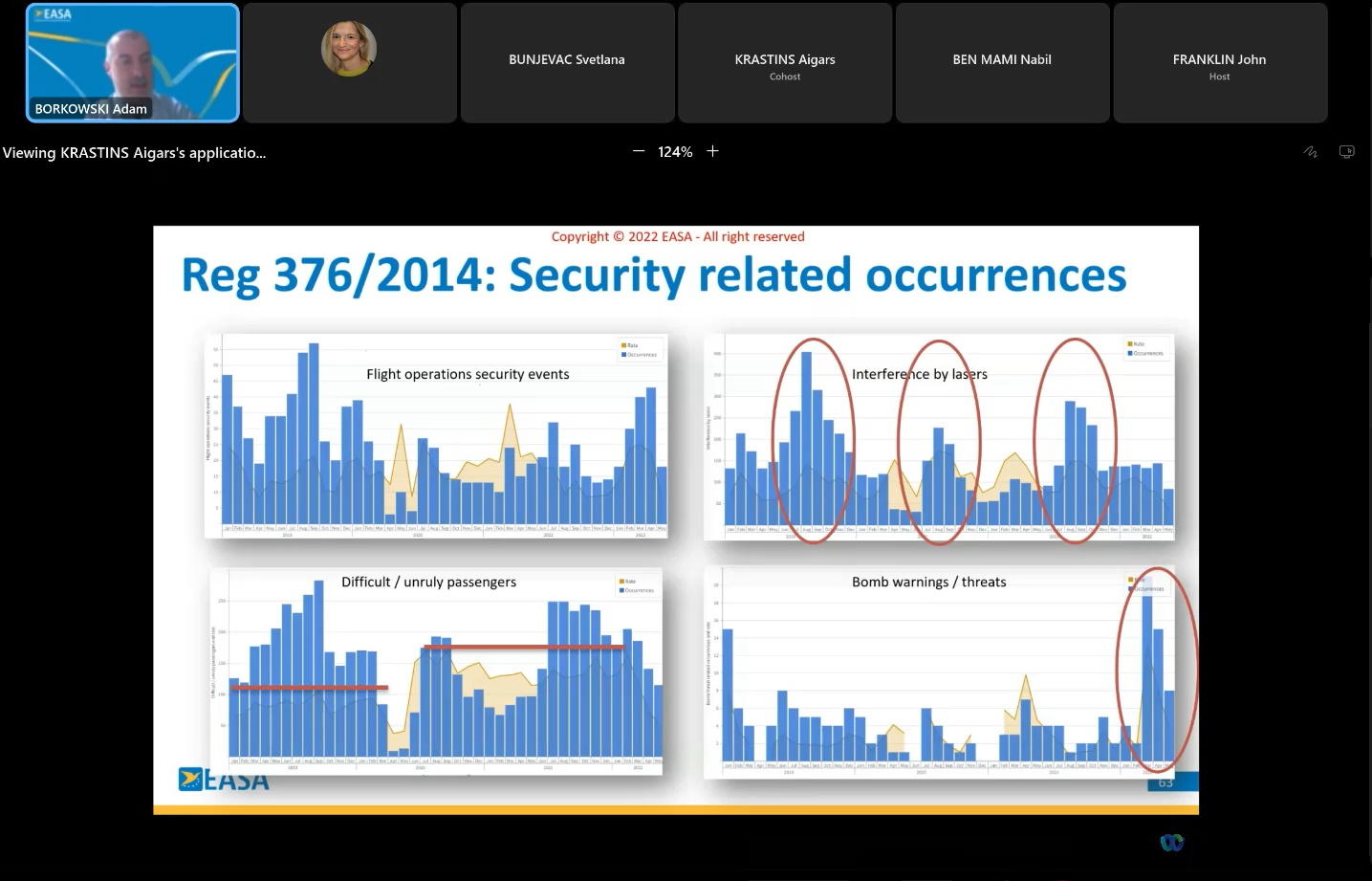