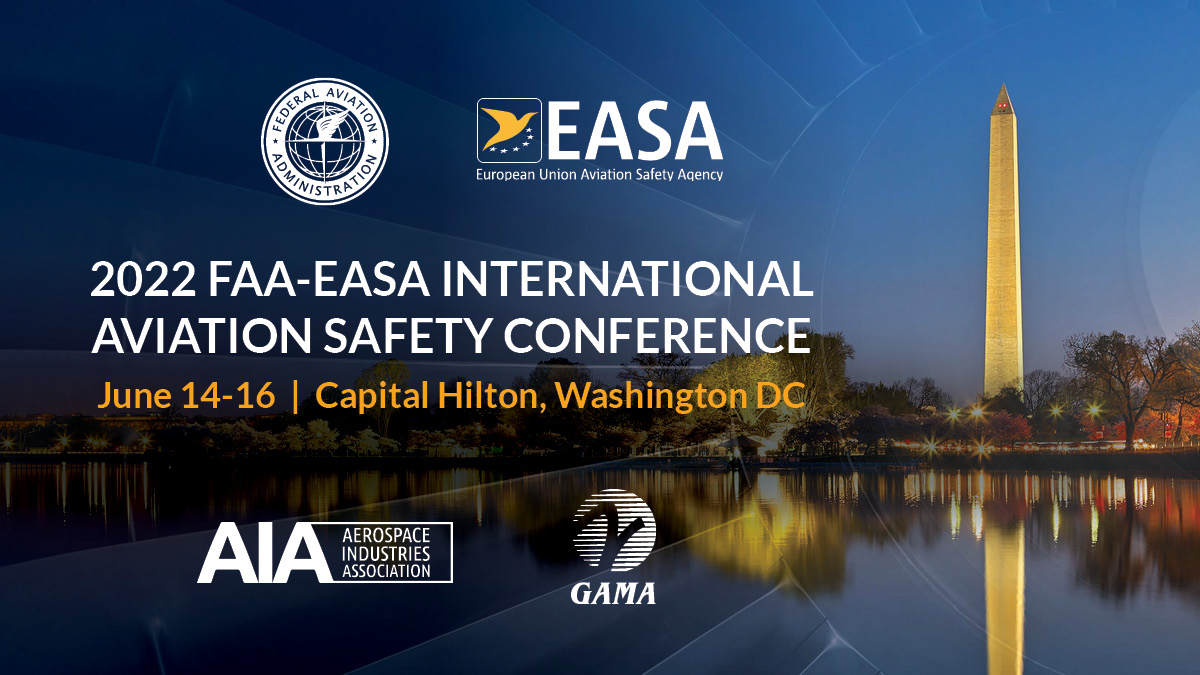 This annual conference is interchangeable between Europe and USA and this year’s conference was held in USA in its capital city of Washington D.C. Our team participated at this year’s event in USA to learn more about the trends and innovation from the two leading aviation safety agencies in the world.

The conference was held in Capital Hilton hotel in the center of Washington D.C across three days from 14 June until 16 June 2022.

The day was opened by the master of ceremonies, Warren Randolph, who is acting as Deputy Executive Director, FAA Office of Accident Investigation and Prevention. He then invited the first presenter Billy Nolen, FAA Acting Administrator who we also had an opportunity to hear from during our conference the previous week in Sao Paulo, Brazil. Billy in his speech thanked and highlighted FAA’s cooperation with EASA which he called a “bedrock agreement” between the two agencies. They are currently implementing various projects together including pilot training standards, flight simulators, Boeing 737 Max safety approvals etc. Mr Nolen mentioned that Safety Management System (SMS) is expanding to various other type of operators such as manufacturers, airports etc. The areas important for FAA include predictive analysis, use of machine learning and artificial intelligence, mental pilot health and cyber security among other topics. He stressed the importance of aviation resilience in case of another pandemic outbreak where aviation industry learned its lessons in creating various guidelines for vaccines, testing and other health measures. One of the major FAA’s goal is fully predictive system for safety utilizing aforementioned new technologies.

After FAA’s acting administrator, we had an opportunity to hear opening remarks from EASA’s Executive Director, Patrick Ky. Mr Ky listed current priorities for EASA such as:

Patrick also pointed out an interesting fact that the borders between safety and other aviation areas are becoming more blurry and there is a rising need for an integrated risk management combined various areas that are affecting safety. Finally, Patrick also highlighted EASA’s relation with FAA of utmost importance for EASA where they want to have an unified response to these challenges. 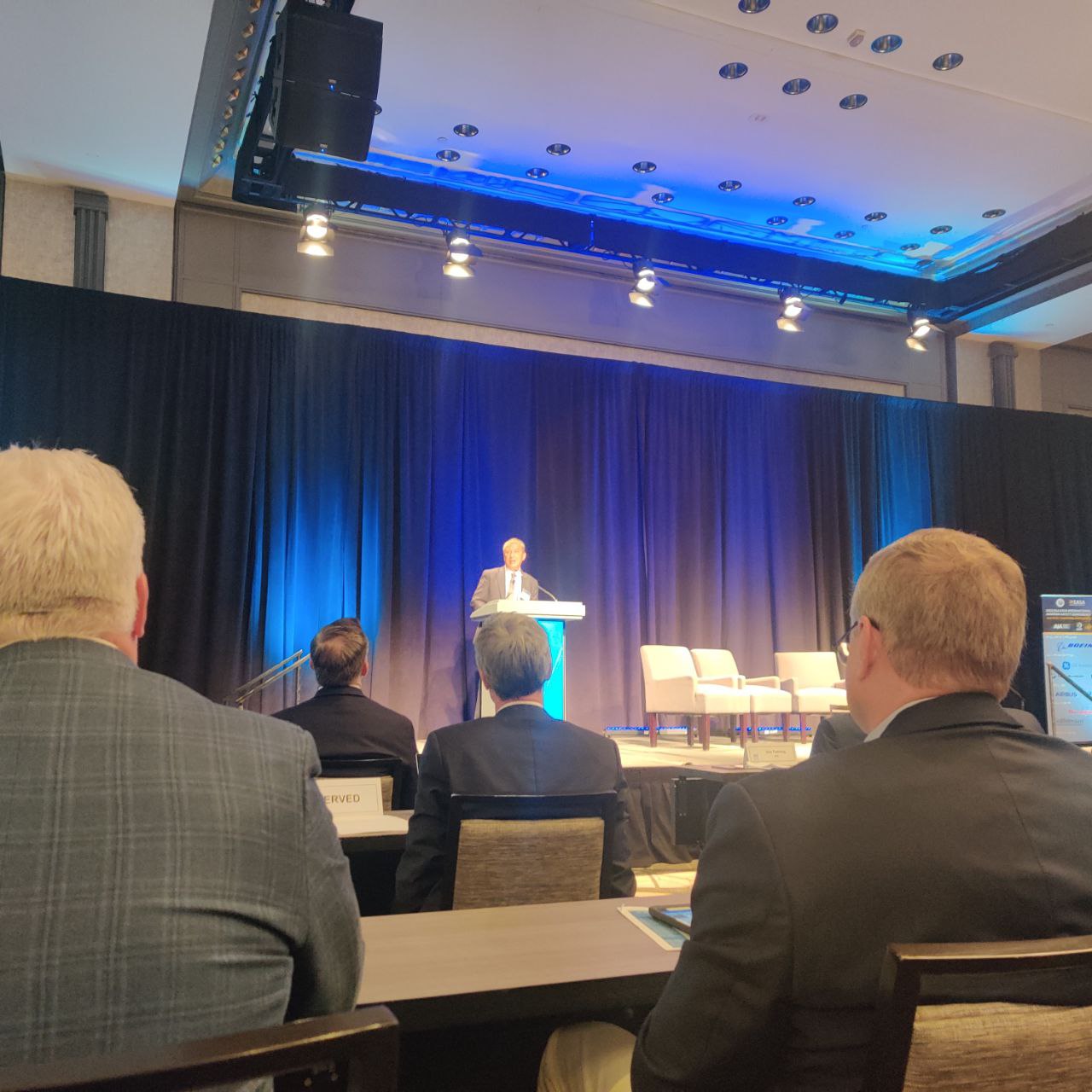 After the two gentlemen’s opening remarks, we had our first panel “Fireside Chat on Aviation Safety” with Billy Nolen as a moderator and Patrick Ky as one of the panelists together with David Boulter, Acting Associate Administrator, FAA Aviation Safety and Filip Cornelis, Director for Aviation, DG MOVE. The panel touched various topics that were mentioned by Mr Nolen and Mr Ky in their opening remarks, some of the interesting information include that EASA’s remote oversights where they want to adopt a hybrid model. This means they will continue remote audits but important items or points will be then the focus for a physical audit. David Boutler mentioned that the data is very important for aviation safety and that positive outcome of COVID-19 is the push for digitalization across the aviation industry. Another mentioned of predictive analysis with Patrick’s remarks that EASA is also working with this but stressed the limitation as human behavior is not predictable.

Next on stage was Mr Juan Carlos Salazar, Secretary General, ICAO who we also had an opportunity to hear in Brazil last week, albeit via video link. Today he was present in person and delivered a speech mentioning key urgent priority for ICAO which is to keep up with the standards in the industry. ICAO is also supportive of data driven decisions in safety and it sees digitalization as positive step towards improved safety. Mr Salazar said that cybersecurity is becoming a very important area for ICAO and calls for enhanced cyber risk mitigations. ICAO considers EASA and FAA as crucial parts in aviation safety across the world and their collaboration with ICAO is very appreciated.

After the coffee break, we had our next panel “Aviation Safety Resilience” moderated by Jodi Baker, Deputy Associate Administrator, FAA Aviation Safety with her panelists Dr. Susan Northrup, Federal Air Surgeon, FAA Office of Aerospace Medicine, Luc Tytgat, Strategy & Safety Management Director, EASA, Nick Robinson, Director General, Transport Canada, Tay Tiang Guan, Deputy Director General, Civil Aviation Authority Singapore and Vincent DeVroey, Director of Civil Aviation, ASD. Very dynamic panel with Jodi leading the panel and asking the panelists to name disruptors in the industry. Some of the mentioned disruptors include COVID-19, conflict, cyber, environmental sustainability, technology, ash clouds, lack of skills, personnel staffing etc. The panelists discussed about each disruptor and gave their comments. Some of interesting comments include that COVID-19 also disrupted the manufacturers, for Ukraine-Russia conflict the aviation industry reacted quick and closed the airspace for Russian carriers as part of the sanctions but mentioned the need to improve work of aircraft airworthiness certifications in conflict zones etc. Some of the lessons learned include: 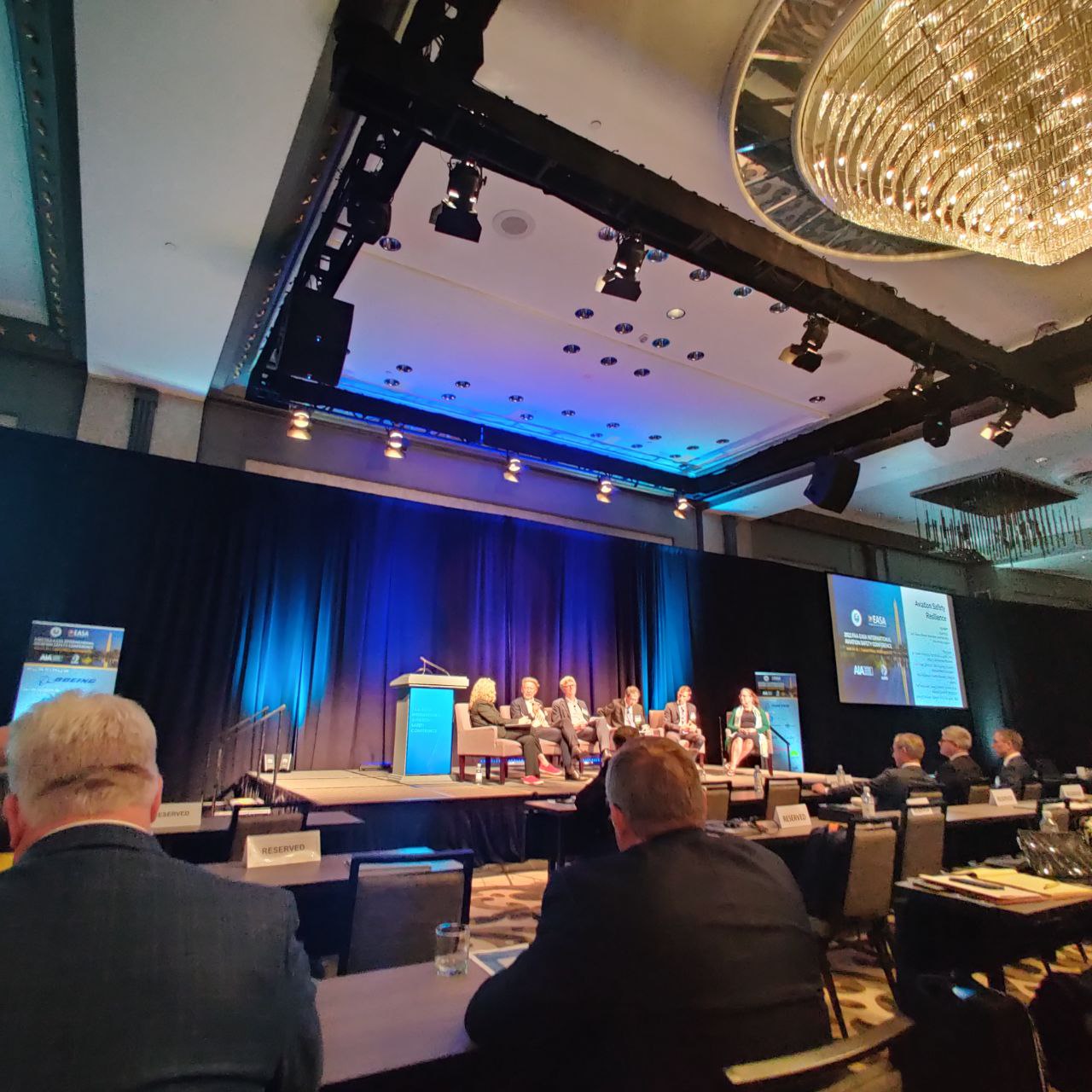 The last session of day 1 was the courtesy of Ludovic Aron, EASA Representative to the United States who had an interesting topic of “Flash Talk – Artificial Intelligence”.  Mr Aron highglighted AI or artifical intelligence as a future for aviation. Some of the applicable use of AI include air traffic management advanced systems for route optimization, predictive aircraft maintenance, urban air mobility and single pilot operations. Mr Aron concluded his short presentation by pointing out that AI is here to support systems to humans and not to replace humans.

The day was opened by Eduard Ciofu, Head of Air Operations & Aerodromes, EASA who had a presentation about “Third Country Operations Authorizations for Air Operators”. TCO (Third Country Operation) is a single European system for vetting the safety performance of foreign (non-EU) CAT (commercial air transport) operators. EASA offers this authorization process completely free with an ultimate goal to protect EU citizens from unsafe air carriers. Eduard mentioned that EASA developed a web portal for TCO authorizations and EASA connected TCO to another instrument called “EU Safety List” where all approved carriers are located. Eduard said that US carriers consists most of the TCO operators and he stressed on very good cooperation with the FAA.

After Eduard we had an opportunity to listen to a panel about the topic of “Application of Data Exchange and Analytics to Improve Aviation Safety” where we had a moderator Tony Fazio, President, Fazio Group International  and panelists: David Hempe, Deputy Executive Director, FAA Aircraft Certification Service, Erick Ferrandez, Head of Safety Intelligence, EASA, Vishwa Uddanwadiker, Vice President for Aerospace Safety Analytics, Boeing and Ian Goodwin, Director Flight Safety, Airbus. This interesting panel discussed how data can be shared between the aviation stakeholders. FAA and EASA developed their own algorithms to analyze various data sets from the operations, however they highlighted the need to standardise how the analysis is done so they can have a unified analysis. EASA suggested to have test datasets to test algorithms to be on the same page with other tools. Airbus and Boeing are doing as well in house analytics, respectively. How to exchange data and keep it standardized remains a challenge.

After a network break, the next panel was “Aviation going digital” moderated by spirited moderator Tip Stinnette, Deputy Director, Office of Foundational Business, FAA Flight Standards Service with his panelists: Natesh Manikoth, FAA Chief Data Officer, Claudio Trevisan, Programme Manager – Digitalisation of Aviation, EASA,  Franz Graser, Aviation Agency Deputy Director, AustroControl, Olivier Jeunehomme, Senior Expert Certification, Airbus Helicopter and Sivakumar Ponnambalam, Senior Director Satellite Services, Honeywell. The panelists discussed how digitalization is transforming work processes in aviation. Tip mentioned that flight crew are increasingly using mobile applications and that we are in the midst of generational change where the newer generations are native born with technology. Some of the trends that are driving the digital transformation include the growing amount of data which is a key driver by Mr Naresh. Italian Claudio mentioned efficiency as a key trend since digitalization can make anyone’s work more efficient while Mr Sivakumar warned that aviation industry is slower at adopting to digitalization in compare to other industries. Claudio made some interesting remarks such as EASA’s initiatives in digitalization such as continuous airworthiness certificates and digital cockpit and shared his dream to have an international collaboration group where they could discuss and standardize digitalization processes among its members. 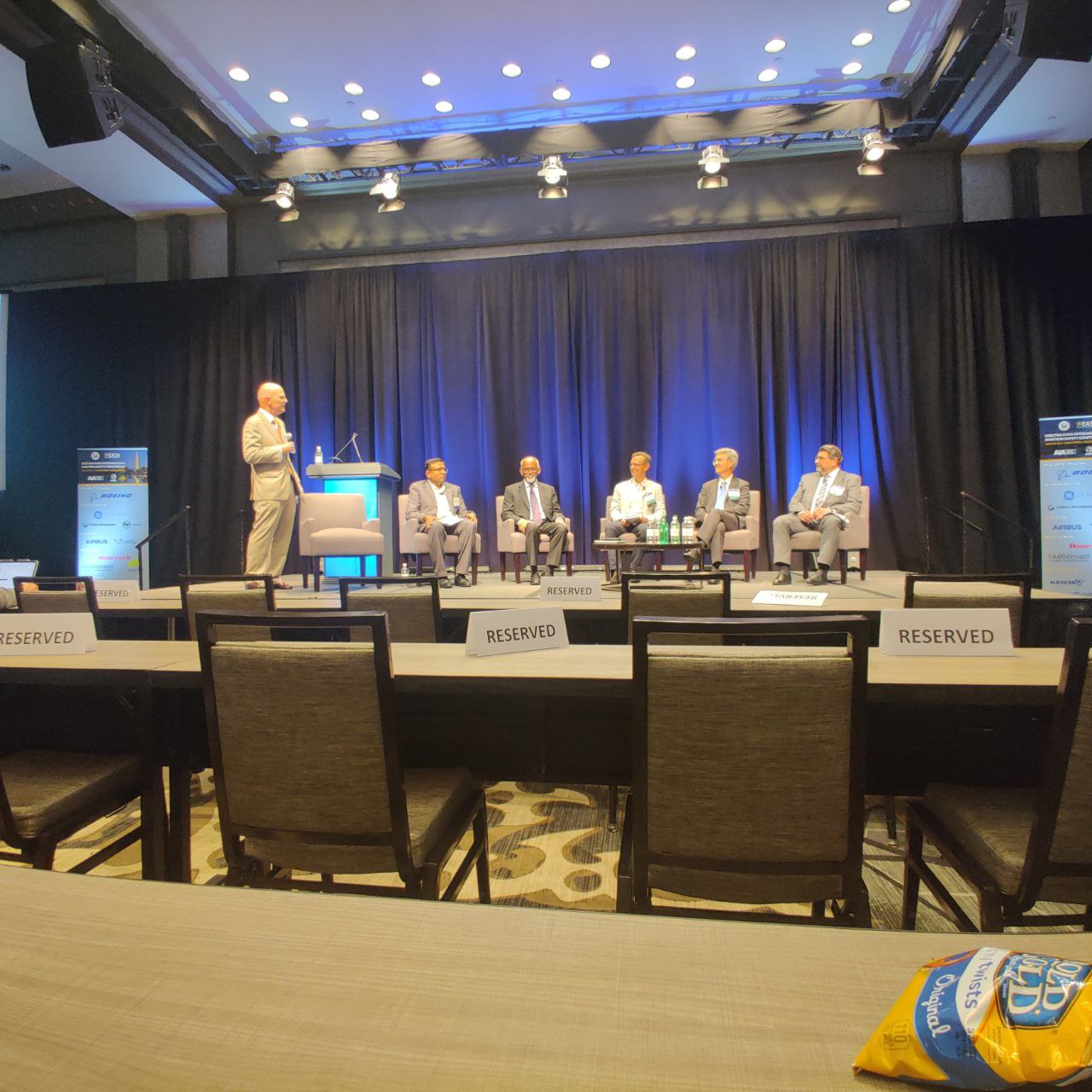 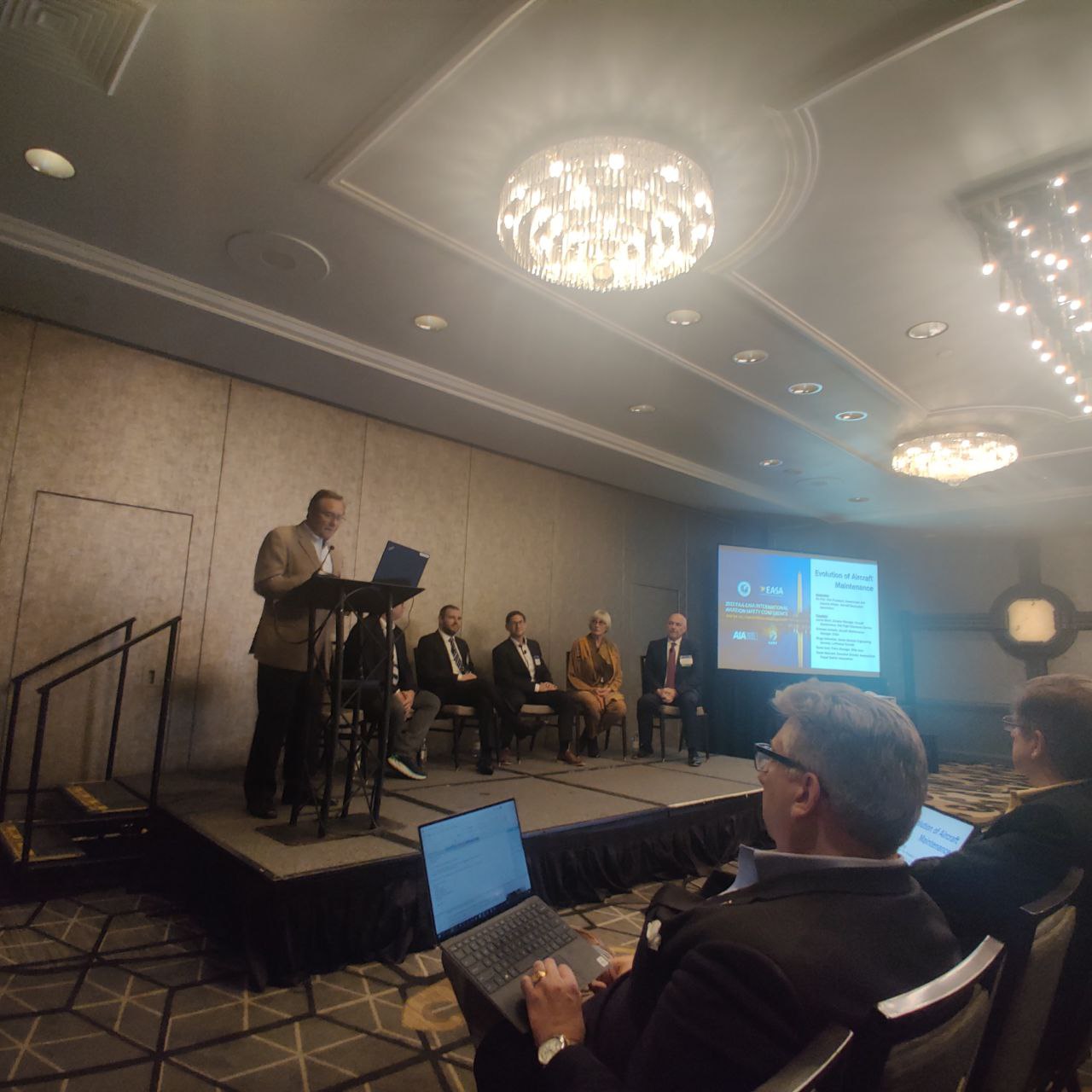 And the final session of the day was “Flash Talk – Pilot Training and Flight Path Management, AC-120-FPM” by speaker Kathy Abbott, FAA Chief Scientific and Technical Advisor, Flight Deck
Human Factors. Kathy showed more about FPM – The FAA has issued draft Advisory Circular AC 120-FPM to provide guidance and recommended practices for operational procedures and training to assure the intended guidance and control of aircraft trajectory and energy. Known as flightpath management (FPM), this includes manual flight operations, managing automated systems, pilot monitoring, and energy management in flight or on the ground. Also Kathy showed a video of a simulation of the aircraft landing without pilot inputs using FPM system.

The next session was “Flash Talk –Medical Standards for the Evolving Global Aircraft Operational Environment” moderated by Dr. Susan Northrup, Federal Air Surgeon, FAA Office of Aerospace Medicine who gave us an overview of medical standpoint in the risk management. Dr. Northrup highlighted the issue of pilot incapacitation which continues to pose a safety risk in the global aerospace system, whether the pilot is located on the ground or at altitude.

The conference was closed by David Boulter with his closing remarks and then followed by Luc Tytgat who announced that next conference will be held in Cologne, Germany.

We would like to thank the organizers for an interesting conference!