Our team at Inxelo Technologies participated at this year’s International Air Safety Summit 2020 organized by an organization Flight Safety Foundation. This year’s conference was held online due to COVID-19 pandemic.

The Flight Safety Foundation (FSF) is an independent, nonprofit, international organization concerning research, education, advocacy, and communications in the field of aviation safety and FSF organizes every year its trademark conference named “IASS” or International Air Safety Summit. This year it was supposed to be held in Paris, France but due to coronavirus pandemic that has crippled the world, it was decided to be held online.

Inxelo Technologies as a software provider in aviation safety felt obligated to participate and learn about the trends in the industry as well as how to balance safety and COVID-19 which was the main talking point of the conference. Also, we are bringing here our notes and summary of the conference to our followers and community.

The conference was opened by Mr Salvatore Sciacchitano, Council President, International Civil Aviation Organization (ICAO) who gave a welcoming address noting that COVID-19 is a “grave threat that has shaken our industry” and also praised ICAO’s rapid response produced guidelines for governments and operators for restarting the air transport sector. After his welcoming address, the keynote speech was given by Mrs Fang Liu, Secretary General, International Civil Aviation Organization (ICAO) who noted that the pandemic has led to “catastrophic disruptions” in the movement of people and goods around the world.

With many nations reporting a new wave of infections now, following a downturn that lasted several months, the aviation community should have “no illusions about how quickly the global recovery will take place,” she said. Throughout the pandemic, ICAO also has maintained its focus on established elements of aviation safety, she said.

Session 1 – Changes and Challenges That Now Affect the Aviation Industry

The aviation industry faces a long, difficult recovery from the ravages of the COVID-19 pandemic, global aviation leaders agreed, telling the opening session that their efforts will focus on showing passengers and national governments that air travel is safe.

“It’s not news to anyone, but the aviation industry is facing its deepest and gravest crisis,” said Alexandre de Juniac, director general and CEO of the International Air Transport Association.
IATA data show that passenger demand will decline 66 percent this year from 2019 levels.
Simon Hocquard, director general of the Civil Air Navigation Services Organisation, added that his organization’s data show that, in mid-April, at the lowest point, the number of global flights had dropped 80 percent. Since then, however, flights have increased by 135 percent, he said.

Hocquard, de Juniac and Luis Felipe de Oliveira, director general of Airports Council International, agreed that the global airline industry has suffered unprecedented setbacks because of the pandemic and that, as de Juniac said, “the most important thing that we can do to help the global economy back on its feet is to restart aviation.” 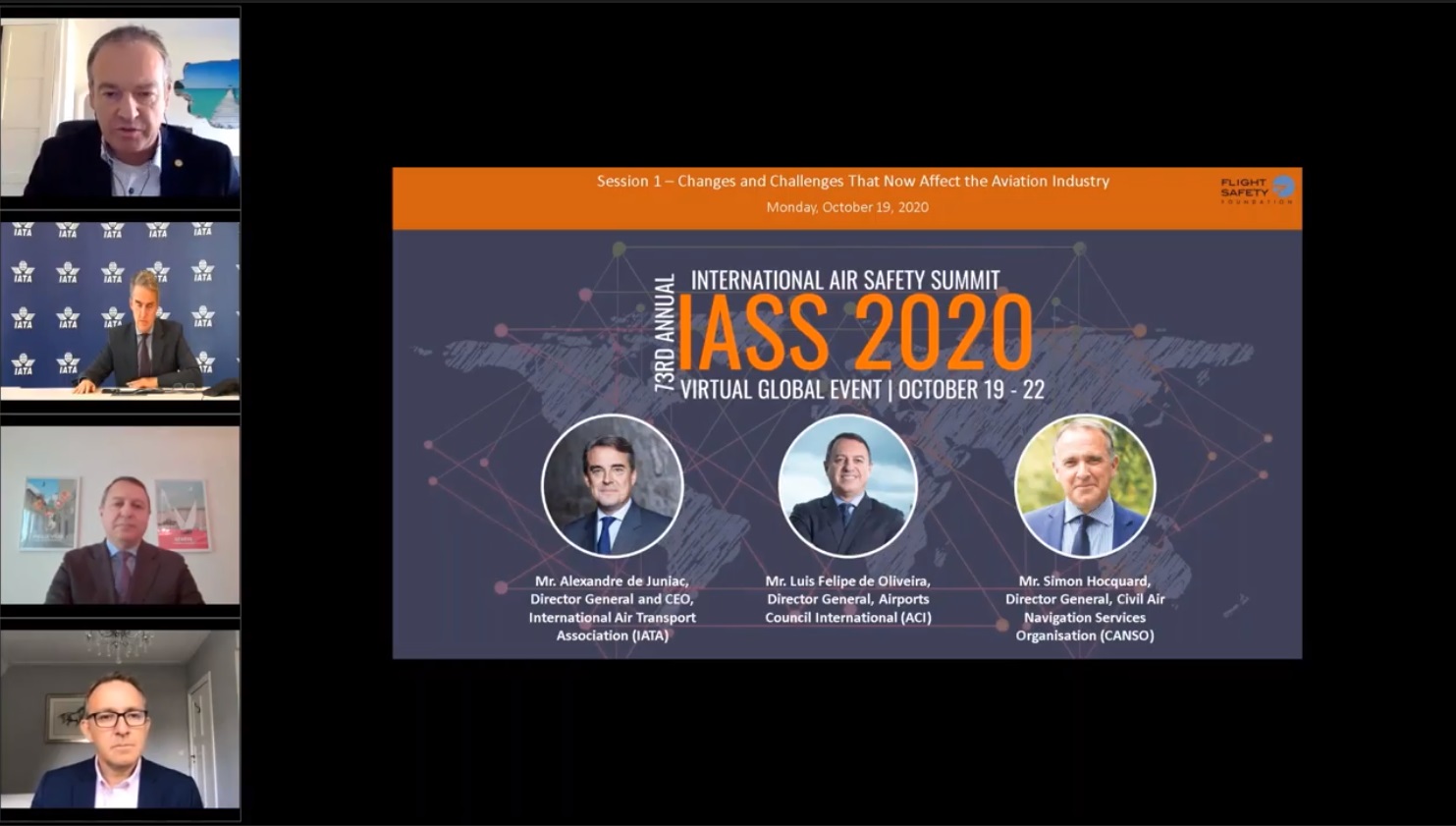 The restart is a two-pronged effort: reassuring passengers that flying is safe and giving governments the confidence to reopen borders “without imposing travel-killing quarantines,” de Juniac said.

To accomplish these goals, the industry needs a common standard for COVID-19 testing, he said, adding that IATA’s passenger survey indicated that 88 percent of those questioned were willing to undergo such tests.

Session 2 – Given the Challenges – Strategies and Implementation Plans

Cooperation within the worldwide aviation community has been a critical element in maintaining safety in air carrier operations during the COVID-19 pandemic, aviation safety specialists told IASS.  “If there’s anything we have learned over the last six or seven months, … it’s that the more we talk, the more we share best practices, the better off we are,” said Ali Bahrami, the U.S. Federal Aviation Administration’s (FAA’s) associate administrator for aviation safety.

Mark Searle, global director of safety for the International Air Transport Association (IATA) ─ a member, along with Bahrami and Tay Tiang Guan, deputy director-general of the Civil Aviation Authority of Singapore (CAAS), of an IASS panel on COVID-19’s challenges to the aviation industry ─ said the industry’s efforts have ensured the safety of air travel during the pandemic.

Tay agreed, adding that “aviation has done its part” to reassure the public that airlines are following international guidance on the most effective public health precautions.

U.S. Federal Aviation Association (FAA) Administrator Steve Dickson said he expects the agency’s review of the work Boeing has done to get the 737 MAX recertified will be completed soon, but he set no timetable and indicated cooperation with regulators outside the United States will be critical.

“We expect the review to be completed in the not-too-distant future,” Dickson said Monday in his Day 1 closing keynote. “We are making excellent progress. We continue to narrow the issues and work milestone by milestone.”

Dickson noted he recently visited Boeing Commercial Airplanes headquarters in Seattle to go through training to fly the revamped 737 MAX on a simulator and then fly the aircraft itself for several hours as the lead pilot. “It was important to me as a pilot to experience the training and handling of the aircraft first-hand,” said Dickson, a former pilot with Delta Air Lines. “I have full confidence that the new training standards, once completed, will be sufficient.”

Dickson emphasized there is no “set schedule” for recertifying the 737 MAX, which has been grounded for 19 months.