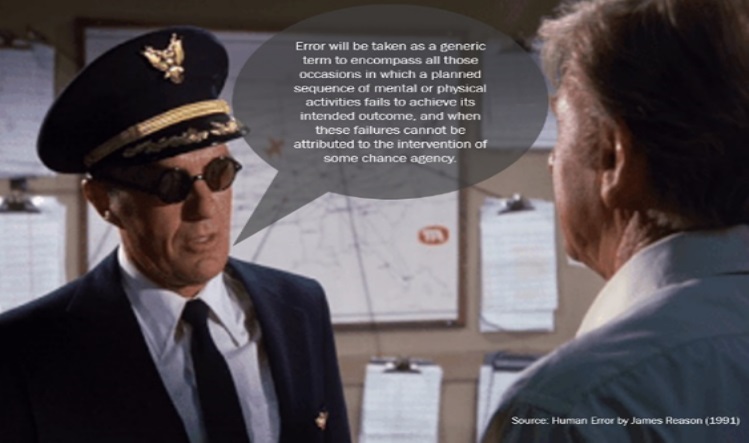 “… our philosophy was 100% compliance equals 100% safe but we were having accidents. We needed more than regulations. Today, we’re proactive and identify and address risk to prevent accidents.”

I was in a deep search at my office. Records were trying to escape through the rough and wet air I was trying to catch to overwhelm the sound anxiety of my soul. Bitterness, care, poorness of safety culture, among others I was feeling close to my desk. My partner had to take care of all tools and equipment, and follow the procedures regarding the acceptance and/or inspection of aircraft components and material from outside agencies. But he did not. He argued lack of time or multitasking activities. It was clear he had a point there. Did you report anything? A huge negative reply was like a punch into my head. I understand you are the new kid in town, Sergio, but I don’t even have the time or the inclination to report such a failure, since it is not part of my responsibilities!

Three hours before I was making my morning safety round. These whistles and machine-guns-like sounds of hydraulic tools along with kerosene fumes were like staying at home a long time ago when I was working for a foreign Repair Station of my country. Of course I was born to live within such an environment like my Old Man did. But times have passed by and turned into improvements and we deal nowadays with a management system, interaction of activities, and safety performance measurments. I was almost ready to complete my inspection according to my checklist when something captures my attention. It was a jack below a wing and MIL-H-5606 shower raining all over an engineer, who was fighting against the fluid.

What does Dr. Reason tell us about latent conditions? It was at least the first thing I was thinking of when I saw this shiny red rain shower all over the engineer, who was between fighting not to get blind and looking for sawdust within the premises. He found it after a relative long time. No signals, no evacuation plan on any wall whatsoever, no emergency equipment spots included in the plan. Spillage, lack of emergency planning, or a poor safety culture. You might think these are just words. These are the outcomes of a management system. The results of someone’s performance, because one accomplishes duties, in terms of functions or responsibilities, with commitment, ethics and professionalism, which means someone’s accountability.

The interviews I did, the records I used to compare the statements along with the facts that occurred that day told me loudly a procedure was not followed. Are you familiar with this circumstance? You know, sir, we were undergoing rush times. We had to dispatch the airplane, since it’s a VIP customer. We have no jacks for that airplane type. We’ve been told to be smart and resourceful enough. And that was what we did! But what was the scale like in this case? To be resourceful, to be in a rush. I know it could happen. In fact, this is nothing new to anyone of us, but what about the borrowed jack inspection and tagging? I understand, Sergio. Just let me tell you the time constraints made we omit the incoming parts inspection process. Besides, it was not the first time we used the jacks without the previous status inspection! Dr. Reason comes again into play. He told us in his book “Human Error” as follows: “There is usually one way of performing a task correctly, or, at best, very few; but each step in a planned sequence of actions or thoughts provide an opportunity to stray along a multitude of unintended or inappropriate pathways”.

Once, twice and so on. We are dealing here with a tiny seed or a hole that appears in one of the layers of defenses. And the maintenance operational personnel need always to get things done. Otherwise, the consequences would go against their pride and honor. Not dispatching an airplane despite lack of resources is out of operational crew’s culture. All of us are plenty aware of this. That’s the culture. That’s the accountability. Does someone ignore this? We all know that the answer is a huge no. We also know this is happening over the years. What could be done then? A sound training program for maintenance operational personnel, including the qualification or OJT program, but not ending in some fair for OJT forms looking for signatures despite actual performance. A TNA could be helpful as long as there would be a will linked to safety objectives aligned to a maintenance organization’s safety policy. But I’m just sharing here a mitigation plan that perhaps will never happen.

Meanwhile, it was time to go back home again. Over and over. My boss drove me home. The silence was too loud within his truck. Is it a nightmare? I do not think so. A new HF training was scheduled some days after this incident, and I was assigned to deliver the course. I shared my insights and the results of my investigation. It was hard at the beginning. I divided them in groups to discuss fundamentals such as teamwork, assertiveness, working under pressure, use/lack of resources, and safety/quality procedures. They also shared their insights. Notes were taken. Everyone was involved in the training, but I feel that safety will prevail when a management system will be performed and maintained. It is not just some statements we write for the CAA or some auditors. It is a warranty to optimize resources, to know accurately and exactly whether or not we are reaching our goals, to be sure people has the right and proper training they need to perform assigned tasks as documented. That way of performing involves accountability. That way of performing means customers can trust their lives to us. That way, safety will be obtained as an end result of all of these interactive activities, and the possibility of incidents or accidents will be there, but in a controlled mode that looks for not prevailing in our management system.