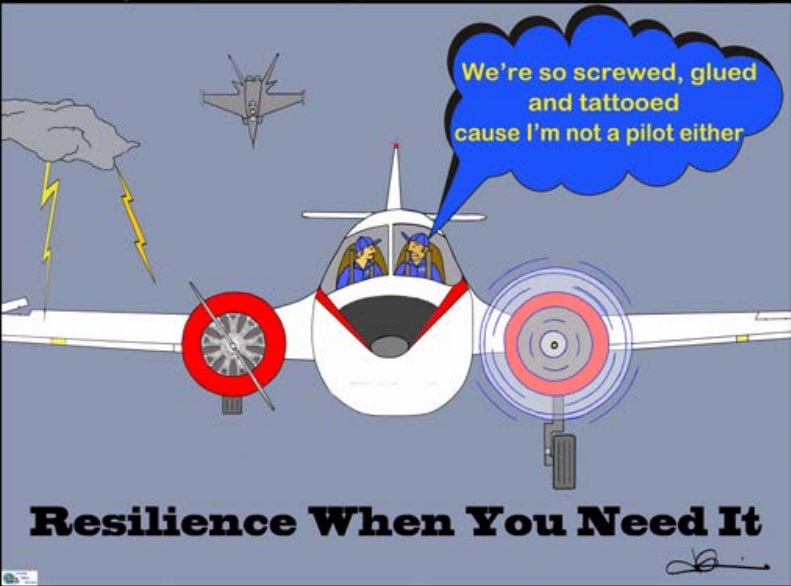 Resilience or resilience engineering is one of the means being studied in order to reduce human error. I recently had the opportunity to attend a lecture by a head surgeon on resilience and wondered just how this would apply to aviation maintenance. I sat with the head of the regional TSB/C and discussed how this would apply even to aviation. The following is some of what I learned and perhaps you can tell me if it can be adapted to enable us to lower maintenance human error. Afterall, we are all human.

First of all,just what is resilience? Using engineering terminology, it is simply the ability of a material to spring back to its original shape. For example, if you bounce a rubber ball, it deforms when it hits something but regains its shape as soon as the pressure is released in the bounce. Now, if we take the human, resilience is the capacity to recover quickly from a significant emotional event. Like materials, that varies greatly between humans. To some extent, for us humans, it could also depend on the event as well. For example, some soldiers fighting side by side come home from a war and carry on as before, while others suffer from PTSD and their lives are never the same. By the way, the word resilience and resiliency are completely interchangeable, although some academics might argue otherwise. Thus, in a vain attempt to keep everyone happy, I will use both.

The resilience the doctor was talking about was the ability of a trauma team to function under sudden overwhelming conditions unlike any ever experienced before. For example, a 747 crashes at the airport with multiple injuries. They can’t say, “Take them somewhere else because we’re full.” They call on resiliency and do what has to be done. They may have to “think outside the box” as they turn the restaurant into a triage center. They may have to turn a laundry into an operating room as they call for extra resources and they do what has to be done to get the job done. This calls for excellent teamwork, a lot of innovation, resourcefulness and resiliency. It is like one of my Dad’s many old sayings: “When the going gets tough, the tough get going.” Maintenance is actually full of stories like these with one that is close to home. Ken Borek Air is just one of many companies that have legionary maintenance personnel with a lot of resiliency. The story of how they repaired a Basler P&W PT6A-67 powered DC3 with extensive take-off damage to the engines, wings, landing gear and cockpit in Antarctica with its perpetual winter , is well worth the listen and read. In 45 days, they dug it out of the snow, repaired it to flying condition and it flew out. If you haven’t seen the video yet, put that on you bucket list and go to YouTube –DC3 repair Antarctica. I would have loved to have been part of that team, but I don’t like the cold.

So resilience for us humans can be calling on an inner strength to accomplish a goal that has never been encountered before. It is an attitude that there has to be a solution to the problem and I won’t give up until it is found. I have seen this in some cancer patients and have a relative who was been diagnosed with an inoperable cancer and told that with chemo he had a maximum of six months to live. Three years later he is now receiving 3 different chemo treatments lasting over 5 hours every 3 weeks. When we phone him he is always cheerful and positive about life even though now he is sick for a week after each treatment, has a good week and starts to feel sick again. He has a resiliency that I’m not at all sure that I would have. Even though he has to know who will win in the end he certainly has the resiliency to say “not until I say so.” He has my deepest admiration.

An unbelievable example of personal resiliency has to be Aron Rolston who, on April 26, 2003, cut off his right arm below the elbow with a dull 2 inch pocket knife blade. There is a movie about this feat called “127 hours.” Renee, my daughter, lent me the movie, but to be honest, I haven’t had the resiliency to watch it. His arm was pinned under an 800 lb. rock in a hiking accident alone and he realized that cutting off his arm was his only hope of survival. I’ve read the story and my teeth shutter when he describes how he had to throw all his weight several times in order to get the two bones to break. But he says the most painful was when he had to cut the nerve going down the arm with the dull knife. He then had to walk out until he was found, severely dehydrated and having lost about 25% of his blood. After the ordeal, he tells people that he didn’t lose an arm but gained a life. Now that is resilience and a positive attitude that none of us know if we have until we are put into a position that calls for it. Thus, if you tend to see the positive side of life and have a determination to make the most of any situation, then you very likely are blessed with a degree of resiliency that I hope never gets severely tested. Resiliency is an inner strength that you call upon when needed.

All right, I want one, but what can we do?

As it is an inner strength, it is below the conscious level. The sub-conscious develops at an early age and influences all of our adult decision making. These Early Life Decisions (ELDs) are heavily influenced by experiences as a young child that we have no recollection of. Thus, resiliency will be developed in part at this stage of life. One of the indicators will be your level of “positive thinking.” That alone could fill an article in the future, but a person like Tony Robbins would be better qualified than I to write it. Positive thinking has served man well through the ages as documented in a book and movie called “The Secret.” Not to ruin the “secret”, but it is simply: “think positive and positive things happen to you.” While it can’t get any simpler than that, a great many people have less happy lives because they fail to believe and follow it.

So Step 1 is to work on being more positive. One way to help do that is to take the time to be grateful. We are all truly blessed, perhaps some more than others, but we all have things to be grateful for. Maintenance tends to be on the negative side of aviation, as we spend our lives looking for something wrong. And when we do find something wrong it means that it is going to cost money. You may have saved hundreds of lives by finding the crack in the fan disc, but the initial reaction is likely, “Are you sure? (like you don’t know what a crack looks like) Those things are %^&* expensive and where am I going to find another one?” Therefore, work on being positive and look for the positive side of all you can.

Step 2 is to accept reality. Yes, this may not be fair, but it is happening. So, let’s just step back a second and see just what I have some degree of control of.

Step 3 is what productive (positive) thing can I do about it?

Step 4 is to control the emotions . At this stage “anger” or “panic” are very unlikely to help the situation. Sometimes a mantra repeated over and over (under your breath and in your mind of course) like: “We shall overcome” or “We can beat this” will help. You have to believe.

Step 5 is to take some time for “mindfulness.” By that I mean time for yourself. Stress can wear you down and we all need some time to “recharge your resilience batteries” by getting away from the stress for a time. Refer to DOM April 2017, for more help here.

Step 6 is to always be prepared for the unexpected, even if it is only mentally. Organizations develop Emergency Response Plans to try to anticipate when resilience may be required. The medical field has developed four stepping stones to assist resilience.

They are: LEARN, RESPOND, MONITOR, and ANTICIPATE. I might put them in a different order, but this is part of resilience engineering which is helping make the medical field a Safer place. Mental strength is much like physical strength. You have to work on it in order for it to be there when you need it. None of us could run a marathon or ironman competition tomorrow without a lot of work preparing for it with exercise. The mental exercise calls for the positive thinking and being mentally prepared for whatever life or work throws at us.

You have to believe in yourself because resiliency resides in yourself and only you can call on that inner strength when you need it.

Until the next issue, be Safe and be happy. Life is way too short to do otherwise.