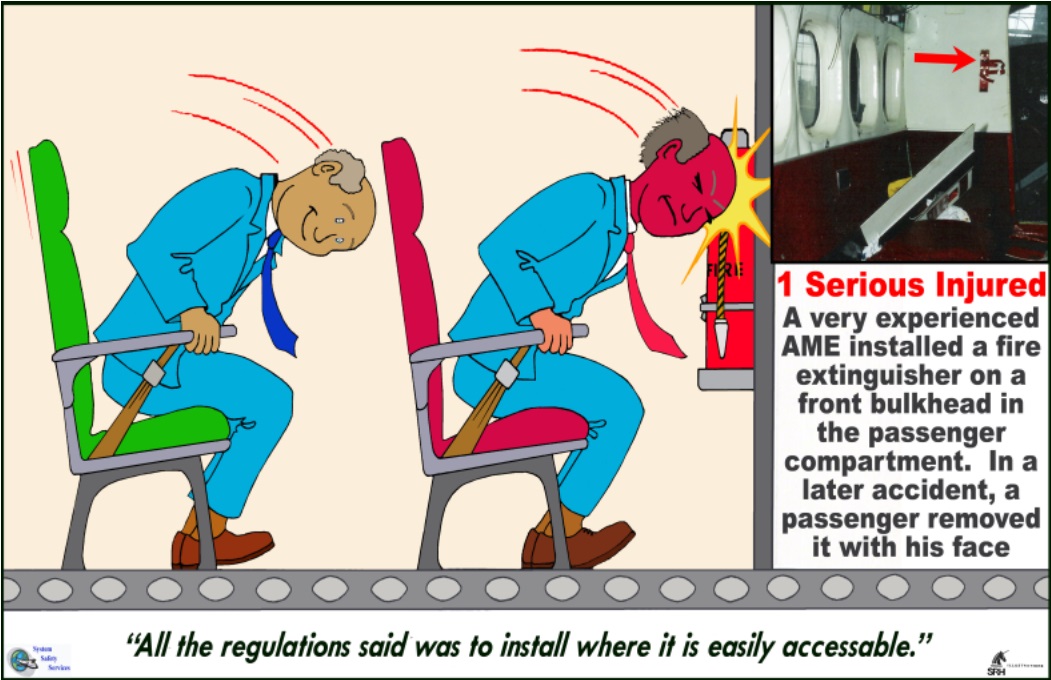 Lack of Awareness – a lack of alertness and vigilance in observing.

You could call it “failure to put brain in gear and think it through.” Very often after the fact, the guilty party will comment: “how could I have been so stupid.”

Let’s look at the cartoon that comes with this article. Sadly it is a true story that I investigated many years ago but errors like this occur all too often to very experienced and conscientious AME/AMTs.

The company bought a DHC3, Otter. that had been used by the military to drop parachutists. In preparing it for its civilian role, the interior was gutted and remodeled to have a better looking interior and forward facing seats instead of the “side saddle” bench seats. One of the items required was a fire extinguisher in the passenger area. An AME was tasked to carry out the installation.

Drawings were submitted and approved by Transport Canada as meeting the G force holding strength requirements and in a location that was easily accessible to the passengers. He decided to install it on the bulkhead right behind the pilot. That way the pilot might be able to reach it in the event of a cockpit fire that his smaller, strapped on the front of the pilot’s seat, extinguisher was unable to completely extinguish.

Not too long after that the heavily loaded, now float equipped Otter entered a canyon that climber faster than it. The floats absorbed most of the crash forces and no one was hurt except the very unlucky passenger sitting in the front seat with the fire extinguisher in front of him. In the abrupt stop, he took the 15 G force fire extinguisher off the bulkhead with his face. He lost an eye and had his face broken in 12 different places. When I saw him, I’m sure that his mother would not have recognized him.

On interviewing the AME he said that “it seemed like a good idea at the time” AND “how could I have been so stupid.” To be fair, there were no seats in the cabin when he installed it but he freely admitted that he should have known better. Lack of awareness usually occurs to people who are very experienced and after the fact will usually admit that they should have known better . It is not a lack of knowledge as the solution to the situation will not be found in a manual or regulation. Many will say that they lack common sense but this Dirty Dozen affects many people with a lot of no-nonsense common sense.

Here is another example of lack of awareness that came very close to killing the AMT. Let’s call him Joe and as you read this think of what you might have done differently. A 727 came in on the last flight of the evening with a nose wheel tire that needed changing. The afternoon shift let the air out of the tire, removed and split the wheel. They then noticed some surface corrosion on the inside of the rim so they dressed it out, then primed and painted the wheel half. Murphy’s law would dictate that this was the wheel half with the valve stem attached. Midnight shift took over and at about 5 am Joe was assigned to install the nose wheel which is a job he had done many times before. He assembled the two wheel halves with the tire installed and carefully torqued the bolts. He reinstalled the air valve in the valve stem and began to add air to the wheel. After a bit he stopped to check the tire pressure. Zero.

He thought there must be a leak between the wheel halves but perhaps it leaked out as the tire was settling back on the rim. After a time he again checked the pressure and again it was zero. He went and got another tire gauge but the result was the same. Zero.

He decided to try one more time and upped the pressure being added. However, no joy as the pressure was still zero. He removed the air valve and proceeded to loosen the wheel’s bolts. That’s all he can remember as a piece of the wheel broke off with a mighty bang heard around the hangar. The broken piece took half his arm off, crushed his chest breaking numerous ribs and struck the side of his head as it flew by him to leave a gouge mark in a ceiling beam. I met him many months later as he was still recuperating. So what went wrong? What did he do so wrong? What would you have done different? A Safety net that could have saved Joe a whole world of grief is a tire cage. Any tire with an inflation pressure of over 50 psi should be done in a cage with you standing a Safe distance away. The culprit in this accident was a small piece of masking tape.

A small piece of masking tape that had been placed over the valve stem inside the rim so it wouldn’t be painted. The valve stem wasn’t but the masking tape was and blended in with the rest of the paint job. It acted as a one way valve letting air in but not out. Keep in mind this occurred near the end of a midnight shift and Joe may have been beginning to have the fatigue attitude. Remember that one? The “don’t care” attitude that comes as you become more fatigued? Joe also would be feeling pressure to get that tire back on the aircraft as that was the last task before its release. But lack of awareness is the main culprit. But what can you do as obviously it seemed like the right thing to do at the time?

If lack of awareness is going to get you into trouble than awareness is the answer to keep you out of trouble. If you ever have conflicting information, STOP and try to work out what might cause that. Had Joe done this he likely would not have been so quick to start loosening those bolts. It may have helped if he had asked others for their advice. This Safety net may have also helped prevent the fire extinguisher accident. The old saying that “two heads are better than one.” improves the chances of a successful solution being found. If you are the person being asked be sure to “play the devil’s advocate” and think what could go wrong.

Taking that little time to ask: “what could go wrong here” would go a long way to reduce lack of awareness errors.

I’ll close the last of the Dirty Dozen articles with my favourite lack of awareness cartoon. 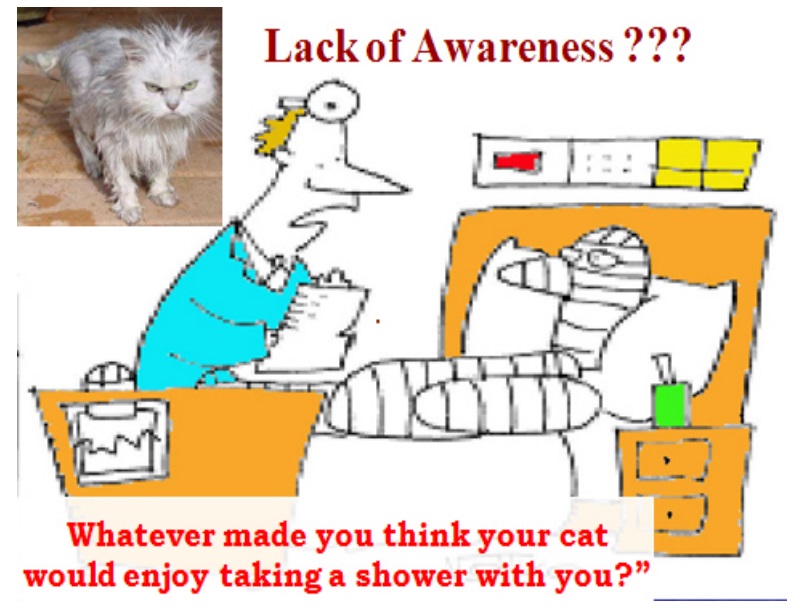 If you don’t remember the other eleven just go back over “The Human Error” article. In the next article I’d like to look at the history of Human Factors in aviation. We don’t have to go back very far and even less for maintenance. Stay Safe.