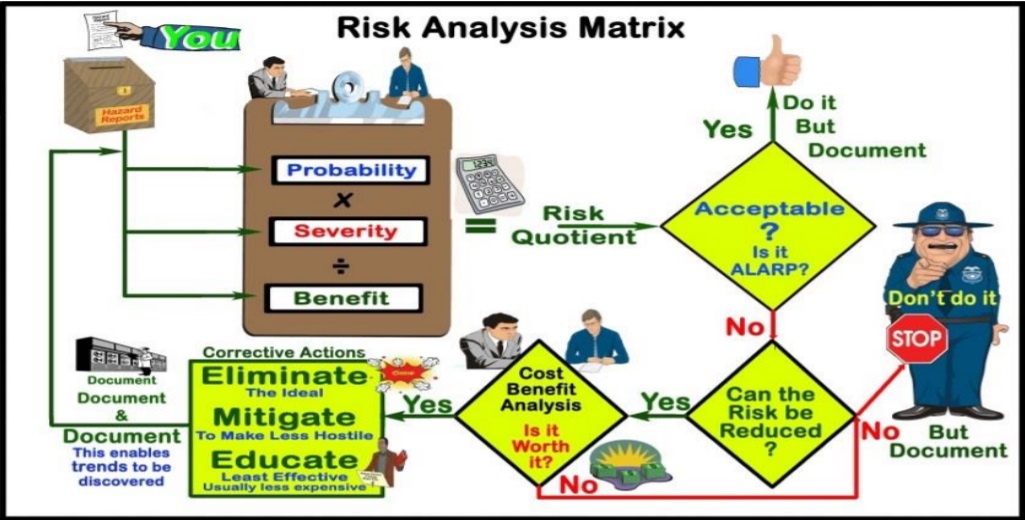 As quoted in the last article, Risk and Incident Data Analysis is the engine that drives SMS. This is where the work gets done to lower the risk to Safety to As Low As Reasonably Practical (ALARP). My father was fond of sayings that would often provoke thought and carry a deeper meaning. One he would tell me as a know-it-all teenager was: “You don’t know what you don’t know.” When it comes to SMS this is exactly right and what the purpose of this module is. Many companies proudly proclaim that they don’t need this SMS because they hadn’t killed anyone YET. Whenever I used YET as a justification for doing something my father would tell me that YET means “You’re Eligible To.” I’ve never forgotten that and I hope that whenever you use that word you’ll remember its deeper meaning as well.

A1. Awareness -We must first be aware that there is a risk. For this, a system has to be in place to raise the initial awareness. Training is required here.

A2. Acknowledge – We must acknowledge that there is in fact a risk and determine how serious it is. I believe that all risks, audit findings or anything that can cause us grief, are initially reported on one form and separated at this point. Thus, a reported pothole will be on the same form as the audit finding that pilots are exceeding their flight hours. Who may decide and deal with the Corrective Action (CA) will be different. Now a pothole can be looked at as a frivolous thing to report but one almost destroyed a company. This company had an SMS in place and determined that a pothole on the side of the road up to their hangar was something that could be fixed when they got ‘around-to-it.” The company trailered their helicopters to the jobs behind a truck that carried extra fuel and chemicals to be sprayed. They were late for an important job and as they sped down the hill, a client in his Mercedes was coming up the hill. Murphy’s Law determined that they would meet right where the pothole was. The truck bounced through the pothole but the smaller trailer tires didn’t. As the axle was torn back it swung the truck into the other lane, RIGHT BEHIND THE MERCEDES. A split second difference in time or speed and there would have been a huge fire, with loss of life and possibly the company. Remember that SMS is simply “putting a system in place that sweats the small stuff so you never have to sweat the big stuff.

A3. Analyze – We analyze the risk and develop ways to eliminate or mitigate (lessen) the risk or, as a last resort, educate ourselves on how to avoid it.

A4. Act On – There must be someone responsible for the risk with a timeline to accomplish the CA in. Something has to be done. Feedback must also be provided

A5. Analyze Again – We must monitor and improve if necessary or possible.

So let’s run through the matrix.

You see something that could cause your company grief or you almost made an error that had it happened, would have caused grief. Being a Safety minded person you complete a Hazard Report form detailing the hazard and including a suggested Corrective Action(s) (CA) that could eliminate or at least alleviate the hazard and turn it in to the appropriate location.

The now reported and recorded hazard will be reviewed, hopefully, by a committee, for probability and severity. Some like to also factor in frequency but I suggest that frequency be factored in the probability.

Many use the low, medium, high category for their matrix and end up with a matrix like the one shown. Each category must have a rating that explains in detail just what each category means. Even then, there may be some “subject to interpretation” that serves to help move the result into a category that favors the person(s) making the determination. 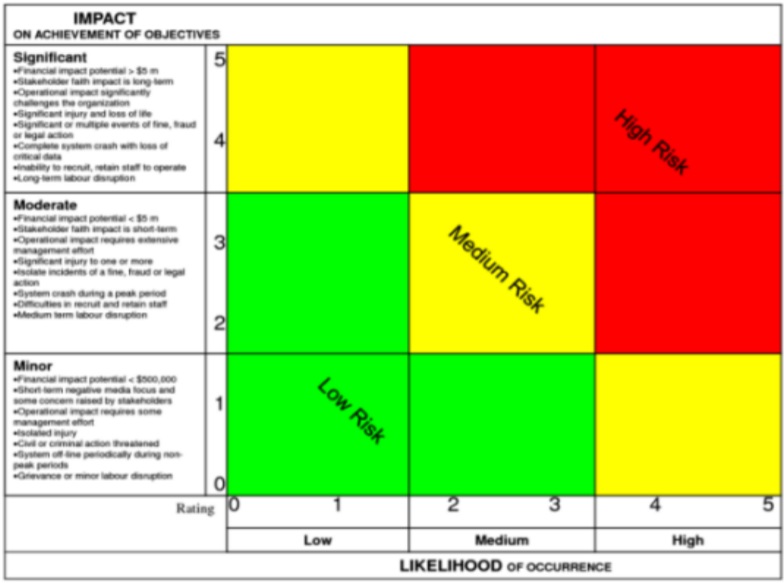 The following matrix was developed to help lessen the “subject to interpretation” problem. It factors in Benefit, which all risks have. For example, you are driving behind a slow moving 18 wheeler and have been for a number of miles as the curves in the road make passing a very high risk. You are going to be late for a very important event at the speed you are going. There is a straight stretch for about a mile, but you see a car at the far end. The probability of passing the truck is high as you’ve done it many times before, but the severity of a collision of two cars with a combined speed in excess of 100 mph would be catastrophic with no hope of survival. As you know that the road gets more mountainous and curvy ahead you decide to “go for it”, feeling you can mitigate the risk by slamming on your brakes and ducking back behind the truck if your calculations are wrong. Ok, that isn’t exactly how your risk calculations go but I’d hope that you would admit that the benefit plays a big role in the decision and if you knew that there was a passing lane a few miles ahead, your decision would likely be different because the benefit would be much less. 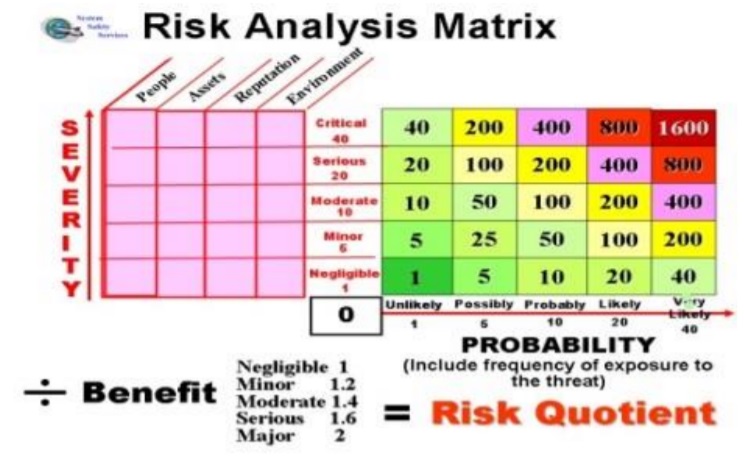 There has to be a benefit for all the risks we take or we wouldn’t take them. Therefore, I say factor in the benefit and always ask yourself, “Is the benefit really worth the risk?” If it’s not then why are you doing it? We had a company, who, when they factored in the benefit, sold their last Twin Otter, as the benefit was just not worth the risk even though the probability and severity were within their established parameters.

Under severity you will see that it is analyzed for not just danger to people but also to property, reputation and these days, environment. In the matrix you select the one that has the highest number for your calculations. Using this system you end up with a number that determines the level of risk. Each level of category must have a detailed explanation as to what constitutes that level. This helps lessen the “subject to interpretation”

Another influencer of the final number is the Risk Tolerance (RT) of the organization.
This will vary depending on:

Finally, a Cost/Benefit Analysis (CBA) must be carried out to determine if the cost will be worth the benefit. In other words, will the hoped for increase in Safety be worth the cost?

The Accountable Executive, the man who controls the money, will likely be making the final decision but if you have a solid business case then the CA will likely be implemented. Follow up will need to be done to see if the CA worked as planned.

Is it a lot of paperwork? Yes. Will it pay off? Yes. Measuring the accident that never happens is difficult but the company and its employees will be Safer. I’ll finish with another wise Father saying that I heard many times: “Anyone can make a mistake but only a fool makes the same mistake twice.”