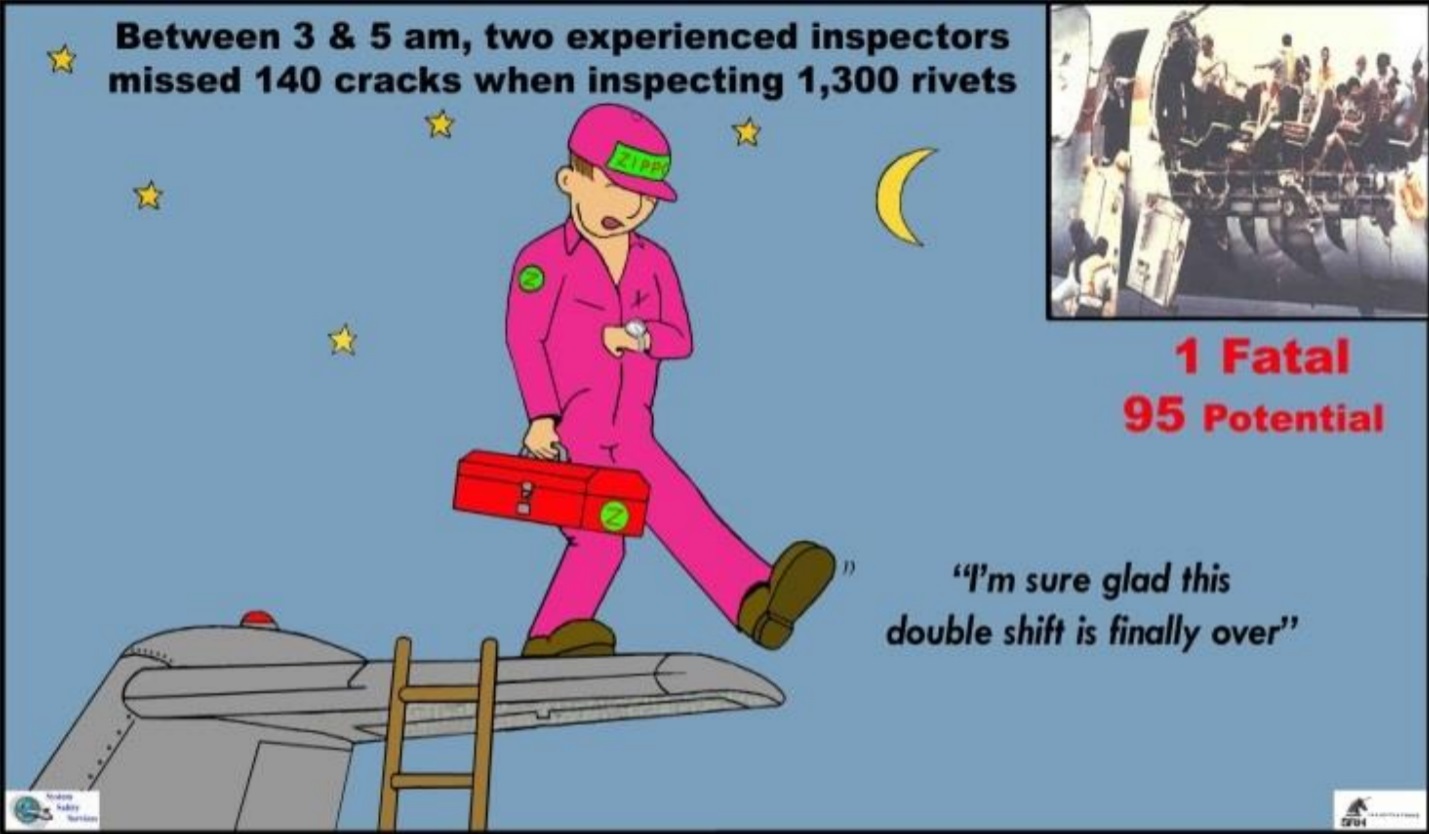 Fatigue is something we have all experienced at some points in our lives. If you work shiftwork then you know it all too well. Fatigue is the #1 contributor to human error. Partly, because as you become more fatigued it is easier for the other Dirty Dozen accomplices to “do their thing.”

As Fatigue is considered #1 and there is a lot of material to cover, I am going to discuss it over two articles so Joe and Greg don’t get upset with me filling up their magazine. Plus, I will also be able to add more “nice to know” bits of information.

Let’s start with a simple quiz to create some controversy. They are all True or False with no maybes allowed, but apply to most people. Circle what you think the correct answers are to the following:

The answers will be provided in the next article so keep this one handy.

With fatigue, the industry tends to underestimate the problem and we tend to overestimate our ability to deal with it. Do we ever! While we are getting better, we still have a long way to go towards accepting that we aren’t as “sleep proof”as we may think. As a teenager I would often party all night and go to work the next day suffering from fatigue and dehydration. Ok; also with possible alcohol poisoning, but still there and ready to “tough out the day” before sleeping, unless there was another party to go to. Or how about working all day and driving 25 hours from the West coast to the Prairies where my relatives had a farm. I will admit that as I got close to my destination I started seeing cars on the road ahead of  me that weren’t really there, but I only had another hour to go. Today you are in greater danger of being killed on the road by a tired driver (you?) than a drunk driver.

Fatigue may be acute, which is intense but short duration. For example: Run up five flights of stairs and you will feel fatigued (at least I will), however, after a short rest you are ready to have a go at the remaining 81 flights of stairs in the Empire State building stair climbing race. Another term for acute fatigue is exhaustion. You feel beat, but a short rest or good night’s sleep has you feeling
ready to go again.

Chronic fatigue is the dangerous one. It is the result of frequent recurrence and/or long duration. Chronic fatigue will require more than just one good night’s sleep to restore you to your normal perky self. As you short change yourself of sleep, you begin to develop a “sleep debt.” We will talk a lot more about sleep in the next article, but like any debt, it must be repaid.

So what are the causes of fatigue? (There are 12 of course)

1. Long Hours of Being Awake – Whether you work or just lounge around will result in you becoming fatigued. Hard work may cause you to become physically tired sooner but all living creatures must sleep or they will die. Just how long can you remain awake before you die? The world record is held by a California teenager (at the time) who stayed awake for just over 11 days. (264 hrs.) In that time he experienced hallucinations, paranoia and mood swings. The Guinness Book of World Records refuses to accept any new “staying awake” records as it’s considered too dangerous. It has been reported that one of the many experiments that the Nazis carried out on their six million “volunteers” was to force a group to stay awake until they died. They were reported to have lived from 14 to 21 days.

2. Lack of Sleep – This can occur even when we go to bed early. Sleep apnea can cause you to wake up tired, as can the next door all night party that you didn’t get invited to. Sleep apnea is a condition that causes your breathing to be partly obstructed when lying down asleep. Symptoms are loud snoring, brief periods when you stop breathing altogether and waking up tired. The symptoms get worse as you age until, like my mother-in-law, one morning you wake up dead. If you feel that you may have sleep apnea, see a doctor. It is found that by middle age, 9% of women and 24% of men have sleep apnea and don’t know it. If you suspect that you may have it, arrangeto go to a sleep clinic where they will record how many times you wake up in order to start breathing again. My wife inherited the  condition and they recorded her waking up 284 times. She remembers none of it. If in doubt, check it out and you will be amazed at your improvement in life not being tired all of the time.

3. Stress – This affects your ability to get a good night’s sleep resulting in that tired, lethargic feeling. As stress is another one of the big four Dirty Dozen, we’ll cover it in greater detail in a future article.

4. Some Drugs and Medication – When reading the pages of side effects, there are some that will tell you that it may cause drowsiness and not to operate machinery. It doesn’t say that you can’t work on them, but it is expected that you’ll realize that the warning applies to you as well.

5, Large Temperature Variations – Cold or hot temperatures will bring on fatigue as the body expends energy to keep the body temperature within normal range.

6. Noise – High noise levels help bring on fatigue. A company was ordered by the WCB (Workman’s Compensation Board) to remove a large compressor in the corner of a hangar. Once it had its own soundproof home outside the hangar, the productivity on the hangar floor noticeably increased.

7. Vibration – Riveting, as an example, has been found to increase fatigue. Combine that with the noise and after a while some rivets begin to have “smiles” beside them.

8. Strong Lighting – Strong lighting and to a lesser degree, weak lighting, brings on fatigue. We humans have a narrow range of conditions for optimal performance.

9. Boredom. It appears that if we are not stimulated the brain begins to think that now is a good time to catch up on some sleep. Try driving on a straight stretch of road with no scenery change under a hot sun with the AC out. That is a recipe for the “head snaps” (involuntary microsleeps) to begin as fatigue sets in.

10. Circadian Rhythm – This is one of many rhythms within our body. Circadian comes from Latin and means “about a day.” If you look at the diagram you will see a line that starts at 0 hours (midnight) and dips down to a low between about 3 to 5 am and rises to a peak at about 12 noon.
This is a graph of your mental alertness in a 24 hr. timeframe. 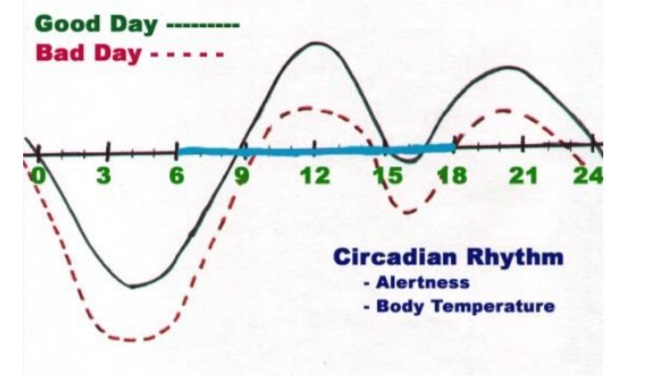 It’s been discovered that our inner core body temperature follows along this same line, but I’ve added Bad Day when you come to work already tired. Aloha’s AMT’s inspected those 1,300 rivets with the 140 cracks at exactly 3  to 5 am after having worked during the day before starting their midnight shift.
The next article will describe the effects of that low.

11. Low Blood Sugar – This will bring on fatigue, so the secret is to watch what you eat. As you become fatigued you begin to have more difficulty controlling your blood sugar. Look at the graph and you will see that high carbohydrate food (Yes, that donut or any candy bar) can result in a high blood sugar spike followed by an even lower blood sugar. Avoid the sugar foods, specially, if you are tired. 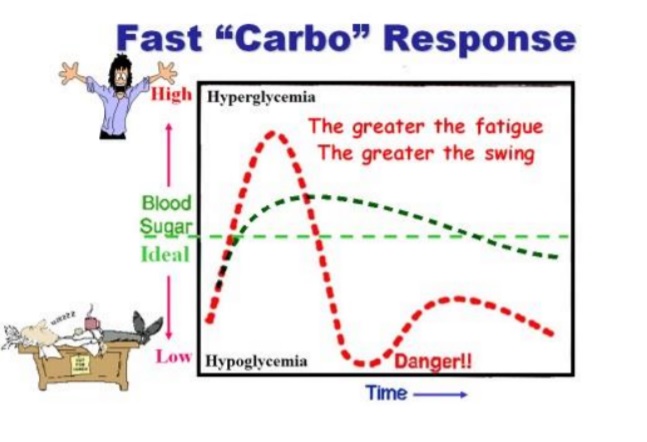 12. Dehydration – This is a source of fatigue that we usually don’t think about. If you wait until you’re thirsty, you’re already dehydrated and will be beginning to feel fatigued. The secret is to drink lots of water (within reason) and avoid the diuretics of coffee, tea and alcohol. They may taste good, but do not quench thirst.

In the next article we’ll discuss the effects, how to avoid them and oh yes, provide
the answers to the quiz questions.