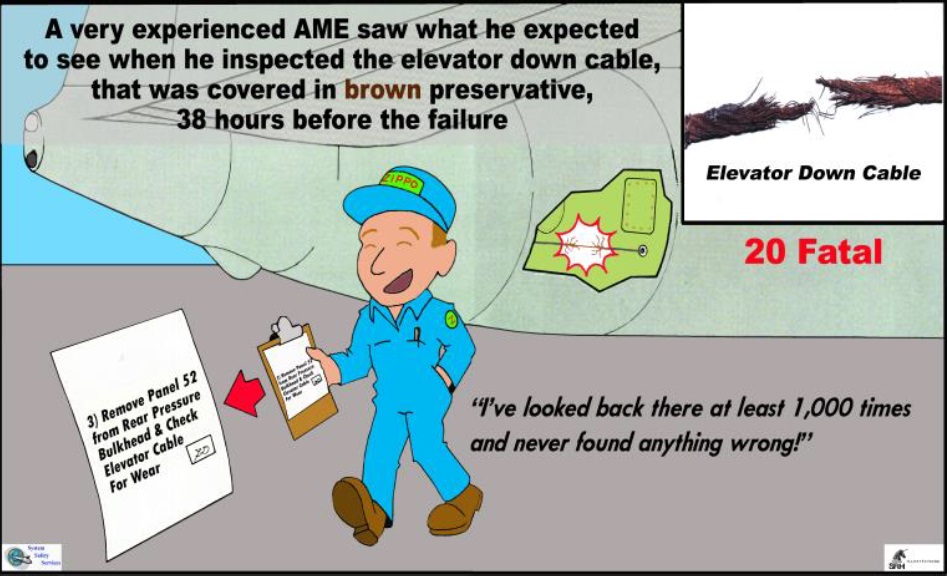 Aircraft maintenance calls for a lot of repetitive inspections to be carried out with the hope that nothing wrong is found. This sets one up for the second contributing factor in the Dirty Dozen contributors to human error: Complacency.

Complacency is most common among the “no hair and grey hair group” who have done the task many times and may even boast that they can do it in their sleep. In some ways, that is almost what they can be doing without realizing it.

Complacency is defined as: self-satisfaction accompanied by a loss of awareness of the dangers. Coupled with Complacency is an outcome called Expectancy, where the person will see only what they expect to see. This is done without the realization that it is occurring.

For example, we drive the same route to work every day and in time we become complacent. In fact you may say you could drive it in your sleep. But one night they put temporary 4-way stop signs at one of the intersections you normally drive through. The stop sign is clearly visible but you don’t expect it to be there and you drive right through that intersection just like you always do. If there was an accident the first thing you would likely say is “I didn’t see that stop sign” but it was there and you just drove through it.

Let’s look at an actual case study everyone can relate to.

Aloha Airlines, Flight 243, April 28, 1988 became known around the world as “the convertible” when it lost 18 feet of the upper fuselage at 24,000 feet. Only one person out of the 95 on board lost her life but the world demanded to know how this could happen to a modern jet transport. This was not the first Boeing 737 to have this type of breakup as seven years earlier a Far Eastern Air Transport aircraft broke up over Taiwan and spread wreckage over a four square mile area. 110 lives were lost. The aircraft was experiencing pressurization problems in the days and just before the final flight. Severe corrosion was found at the lap joints. Undetected cracks from the corrosion had joined
together to cause the breakup at altitude. It was felt that with proper maintenance and inspections this could never happen again. The cracks would be readily visible long before they joined to cause a decompression. On a previous flight before the accident, a woman walking up the stairs to board noticed a crack estimated to be about six inches long above one of the windows. She said nothing as “they must know about it.” They didn’t. The pilots, flight attendants and other passengers walked up those same stairs but failed to notice the same crack. But, it was there and so were a lot of other cracks that were evident and about to join on that fateful day. 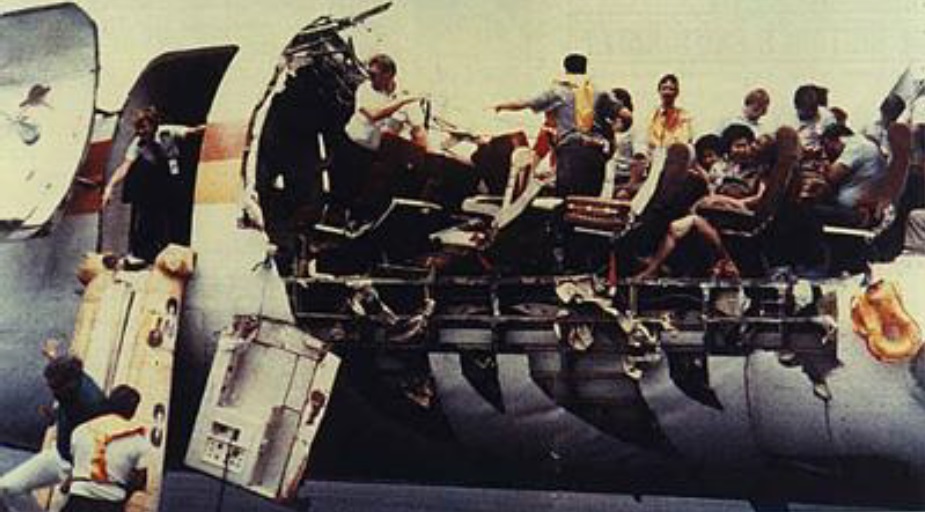 Five months before the accident the FAA issued a detailed Airworthiness Directive (AD) that called for the careful inspection of 1,300 rivets on the forward upper fuselage. If any crack was found, the entire area was to be eddy current inspected as there would likely be other cracks not visually seen yet. Boeing estimated this inspection would take about eight man-hours, but two very experienced inspectors were able to do it in four. No cracks were detected.

An examination of the aircraft after the accident determined that when the aircraft was last inspected for cracks there should have been 140 cracks that should have been detectable to the eye, ranging in length from 0.020” to 0.250.” The two very experienced inspectors, who missed those cracks, had been with the company for 22 and 33 years respectively. They had worked on that 737 since it had arrived, new, at Aloha in 1969. Since that time it had flown 35,496 hrs. and had been cycled (Pressurized and depressurized) 89,680 flight cycles. These cycles made it the second highest cycled 737 in the world. One of its sister 737s was the highest and after this accident, new noncomplacent inspectors found so many cracks that it was scrapped, as were two others.

As an aside, how did they know the length of the cracks when they were inspected five months earlier? A crack will begin at a stressor. In this case, corrosion, and each time the crack is stressed by pressurization cycle, the crack gets just a little bit longer. These crack
expansions leave what are called “beach marks” that can be easily seen under a microscope. By counting back the number of known cycles since the inspection, one can determine the exact length of the crack at the time of the inspection.

So how could they possibly miss 140 cracks? I have no doubt that they didn’t do it on purpose, so WHY? It happened for the same reason that you ran that stop sign: Complacency. They had inspected that aircraft and others exactly like it (Aloha only had 737s) hundreds of times. They didn’t expect to find any cracks and thus, they didn’t see any cracks. While there are other human factors involved in this accident which we’ll touch on in later issues, I believe that Complacency was the prime factor. The interesting thing is, they likely didn’t know themselves, how they could have missed those cracks, after the fact.

One of the evil side effects of Complacency is your self-satisfaction in knowing the job so well begins to justify, at least in your mind, the taking of the odd short cut. The fact that they were able to do the job in half the time that Boeing felt it should take suggests that they were taking the odd short cut. If you look at the cartoon at the beginning of this article, you see a short cut being taken with no awareness of the danger. He gave it the “boy look” but he did not see anything wrong and 20 people would pay the price for his Complacency.

So what’s a “boy look?” When I am unable to find something that my wife sent me to the pantry for, she gives me that scornful glare and says that I only gave it a “boy look” as she hands me the unfound item that was right under my nose. Perhaps it’s one of our male genes we are born with to give things a “boy look”, much like the communication “tune out” gene. At least that is my excuse until a better one comes along.

So what can we do about this insidious, dangerous human factor?

Awareness is our strongest ally. We have to constantly remind ourselves that Complacency can be doing more of the decision making than we wish. What if prior to going up to look for those cracks, the Aloha inspectors had said to themselves: “Tonight I’m going to find a crack”? They could have repeated it a few times while thinking of the task ahead. I think it could have made the difference. So get in the habit of “talking to yourself” before beginning a repetitive task.

Set your mind to avoid the “boy look.” Keep in mind our enemy “Murphy’s law #101”. If you skip giving a good, hard look at a component because you’ve NEVER found anything wrong YET (remember You’re Eligible To), Murphy will guarantee there will be something that could bite you hard today. By training yourself to expect to find a fault every time, you can help eliminate Complacency.

Reading about other people’s mistakes helps reduce Complacency, especially if the error was made on the task that you are about to do. One overhaul company compiled every known error and near error for each of their task cards. It was then mandatory that you read the applicable list before you started the task. This resulted in about a 50% decrease in the repeat of the previous errors.

By always following a detailed check sheet and never ever signing for anything you haven’t done, just because it’s never been a problem before, you can also help ensure that you never become a victim of Complacency.

In the next article we’ll look at what appears to be a simple contributing factor with an even simpler Safety net. But is it?