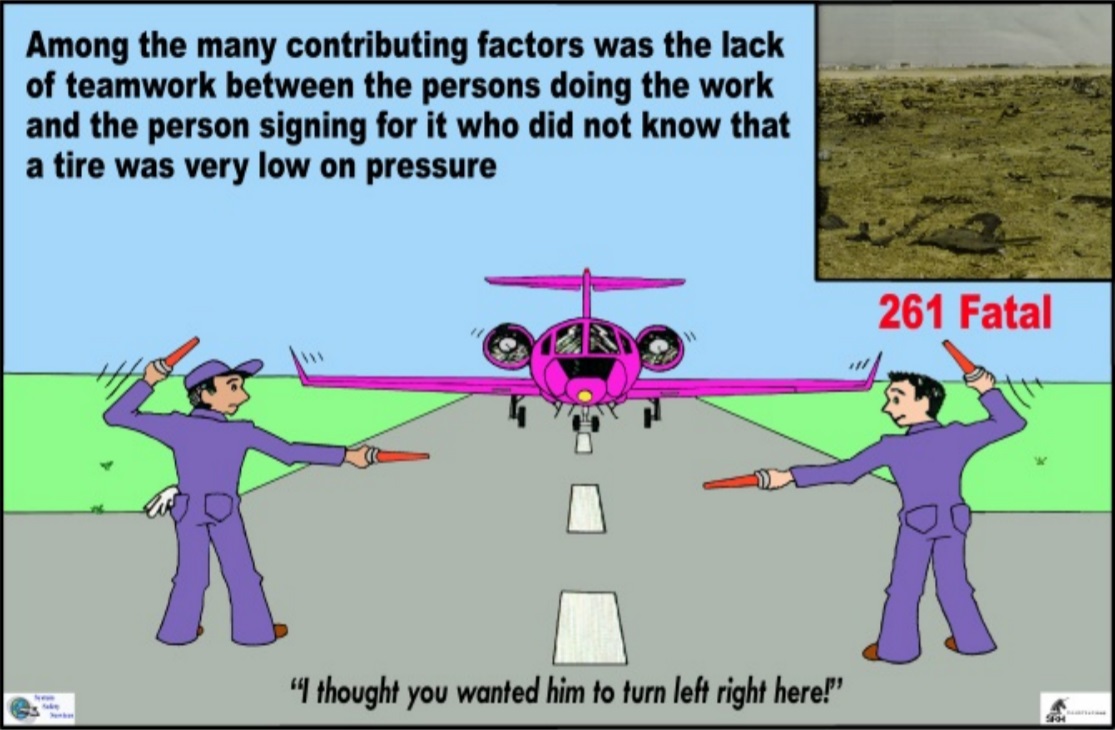 Lack of Teamwork is one of the big four, as when it exists in an organization, some of the other eleven Dirty Dozen are very likely to be there as well. The presence of Lack of Teamwork makes it easier for the others to occur.

Lack of Teamwork played a big role in the fatal DC8 crash shown in the picture to the left. The maintenance team of three were not communicating with the flight crew, especially the flight engineer. who had the signing authority for the maintenance being carried out. Had they been operating as a team, they, very likely, would have obtained the needed air for the low tire, as the Captain carried money for just such emergencies. Pressure and Lack of Assertiveness also played a role in the Lack of Teamwork while on this fatal charter.

What is Lack of Teamwork? It is a failure to seek or consider the input of others. Simply put, it is not working together for the best possible outcome.

Teamwork is not easy, as witnessed by the high number of divorces between a team of two. The team has to be looked at as the entire organization and not just your department or crew.

Teamwork is like a three legged stool. A three legged stool is stable even if the ground is uneven, unlike a four legged stool that would rock. When times become difficult, teamwork will sometimes determine if the company will survive. I’ve seen where employees would take a cut in pay or work less hours in order for all employees to be able to keep working and for the company to survive. 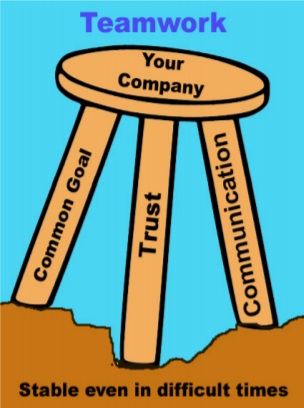 Thus, one of the legs is a common goal. That calls for “everyone to sing from the same song sheet.” The bigger a company gets, the more difficult this becomes. Companies have ceased to exist because the employees failed to recognize the common goal. The term is: “killing the goose that lays the golden eggs.” Without teamwork, the employees see their management as the enemy and have forced their company into  bankruptcy rather than give in to their “demands.” There will be a lack of trust there also, which is the next leg, but the result is a lose-lose situation for all.

The following is a mission statement of an MRO.

This company was having a very high rate of customer returns to resolve poor workmanship. One of the first things we do when we do a Safety review is look at the mission statement. This one says “airworthy aircraft” which is a positive attribute to strive for, but “in a timely manner” indicates that getting that aircraft out on time is also a high priority goal. Actually, it was because there were penalties if the aircraft was delivered late. This was being interpreted by supervisors and employees as: do what you have to do to meet the deadline. Thus, shortcuts were commonly taken in order to get it out the door on time. This was resulting in a high number of worksheets being rushed and that time consuming second look being overlooked. Then we have “most economical price.” To do that; any part that was” iffy” (right on tolerance limit) was to be left in service. Most economical price, perhaps in the short run, but Safety? But everyone had a common goal as outlined by their mission statement.

If you were able to put a click in the box for all the questions, you likely have a good useable common goal.

Teamwork leg #2 requires trust.
Trust is hard to gain and real easy to lose. Teamwork requires trust between all segments of the company to be successful. I have worked in companies where the level of trust was so low that some employees would go out of their way to sabotage a new idea put out by management even though the idea had benefits to the employee. It is a lose-lose of the worst kind and a danger to Safety. A trusting culture is one of the six critical steps to a Safety culture and a must if teamwork is to help bring the many threats to Safety to ALARP. It will have a synergistic atmosphere where it is recognized that the whole is greater than the parts and a compromised solution is the result of everyone’s efforts. This is a win-win and enhances the chances of Safety initiatives being followed by all.

Teamwork leg #3 is communication.
We have talked about communication in previous articles and acknowledged that it is one of the Big Four contributing factors to human error. But communication is a vital part of teamwork and without it there can not be successful teamwork.
As we have said, teamwork can be difficult even when there are only two in a team. No marriage can survive without teamwork and that calls for the three necessities for teamwork, the common goal, that all important trust and open and honest communication on all matters. The first sign of a marriage heading for divorce is usually a breakdown in communication. Companies are not that much different, but as
they grow this must have leg becomes more and more difficult to maintain. Signs of the breakdown may begin to occur when changes in the company are learned in the business section of the local newspaper or worse yet, the evening news.

Companies must work hard to maintain that communication if they expect teamwork and with it a high level of Safety to be a common goal. Safety meetings are a part of this communication. With great communication comes high morale and a bonus of improved productivity. This is the result of synergy at its best.

I remained with a smaller company that paid less than the airline across the runway because the boss knew my kids’ names. He’d give everyone a turkey for Christmas and threw a great Christmas party. All the components of teamwork were there. Sadly, both of my kids had crooked teeth and only the airline had a dental plan that paid a large portion of orthodontist costs for braces. So I crossed the runway to work in a company with little teamwork. One example of that was when a generator required replacing. Only an avionics person could remove and replace the three heavy wires connecting the generator to the aircraft. I could replace the generator, but not disconnect or reconnect the wires unless I was at an outer base and the only qualified person there. On midnight shift, it could take an hour to get an avionics person up to the ramp from the hangar, especially if it was a rainy night. I would call for the avionics person, change the generator and when he arrived, he could reconnect it. When asked who disconnected the wires I would reply the phantom avionics I guess. Most would sign both, but now  and again one would be called to the shop steward’s office to explain. Teamwork was very low and did nothing to advance Safety.

As a company grows, a company newsletter becomes a must. With this should be a hazard reporting form and even a suggestion box to enable a level of communication to be maintained.

Teamwork is a must if we are to bring the many hazards to Safety to ALARP (As Low As Reasonably Possible). We all have to do our part.