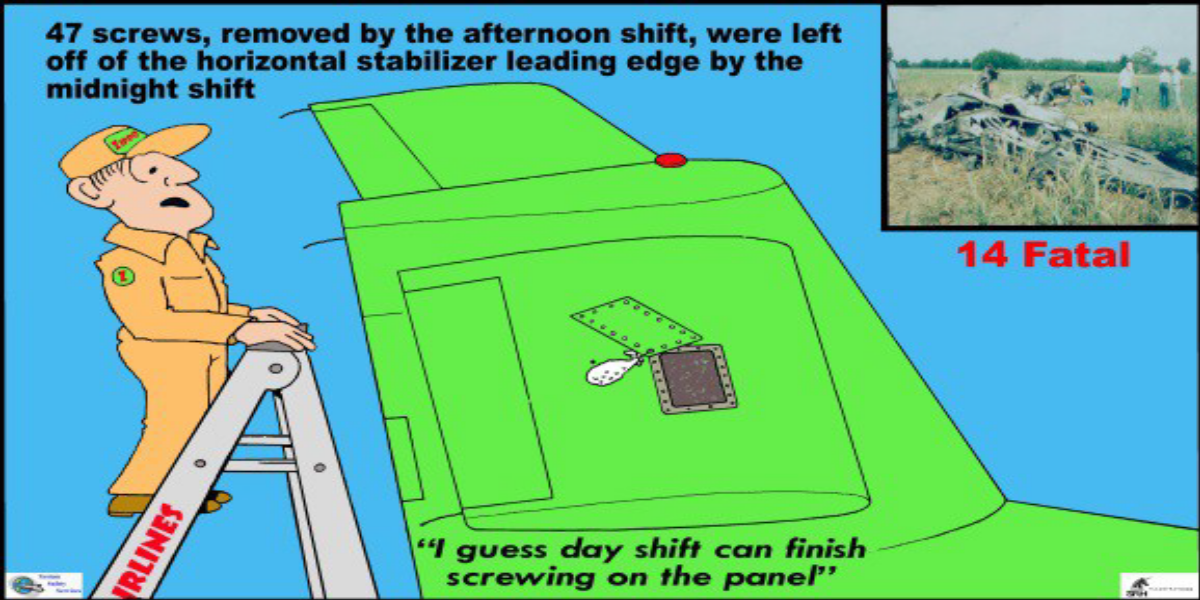 Lack of Communication is one of the big four of the Dirty Dozen. The other three will be along in time if you decide to keep reading these articles. It is hard to tell if anyone is reading them as there is a lack of communication from the readership. (i.e. You the reader, to me the writer who hopes that someone out there finds these articles useful)
Are we, maintenance personnel, good communicators? The above paragraph sort of gives you a hint but the results of a confidential aviation Safety reporting program administered by the Canadian Transportation Safety Board says it all. Out of 232 received Safety concerns, the complaining pilots sent in over half at 120. Passengers even sent in 15 while maintenance was the very lowest of all with FIVE. Remember the last article where Giselle said that when things aren’t right. pilots bitch while mechanics sulk. Face it, there is a lot of room for improvement.
We will concentrate on verbal communication in this session and save written for a later date. Lack of communication, verbal or written, is simply a failure to ensure that the “Mental Pictures” match. For example, I have a mental picture of what I hope to convey to you. If you have the same mental picture at the end of our conversation then good communication has occurred and there has been a complete exchange of information. Sadly, this very often does not occur. They say that communication is only about 30% efficient even though our expectation is that because we have spoken it will be 100%. One can only wish.
A study done by Albert Mehrabian on how a message is transmitted and received in average conversation revealed that 55% of the message was transmitted by body language; 38% by tone of voice and an unbelievable 7% verbally. I have a problem with 7% seeing as we are technically oriented and professionals. Verbal has to be more than 7%. Still, if we keep in mind that it is not near as effective at communicating the message as we believe, more effective communication is possible.

Let’s look at a model of a pilot and an AMT having a conversation. 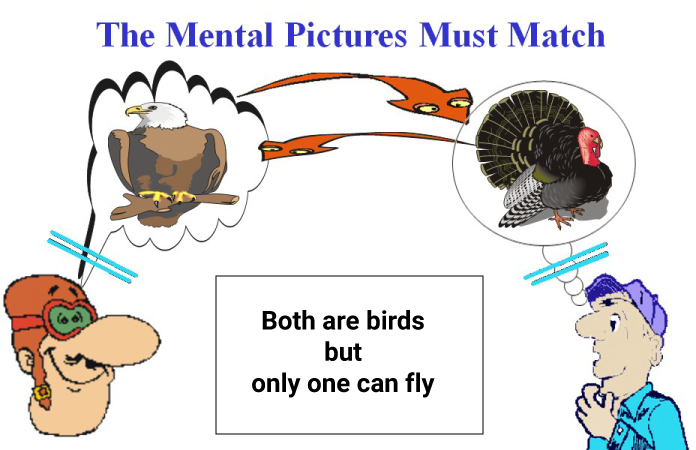 One of the reasons the Mental Picture is not matching can be due to what are called filters. The filters are represented by the double lines and they prevent the full message from getting through. These filters can be, class distinctive, (I am the boss and you are a lowly employee) ethnic, religious or even one’s mood for the day. An extreme example of an ethnic filter involved one of my uncles who had fought in the Pacific theater against the Japanese. As a young lad I can remember him talking about “Jap Crap” for anything built in Japan and he would not ride in a Japanese built car. If a traffic control person of Eskimo decent, who looked like he might be Japanese, was to stop my uncle in his American built car and tell him to hold his speed to under 20 mph for the next ½ mile, my Uncle would do at least 40 mph even if it destroyed his American built car.

If you want to see filters, listen to a conversation between a teenager and a parent about coming home on time. They exist between boss and employee, husband and wife, Democrat and Republican and all too often, between pilots and maintenance. Hopefully they are very thin but one has to be aware of them as they act to prevent the message from being accepted and are more common than one thinks, because we all have them to some degree.

So what’s the secret to good communication?

Someone once said: “You have two ears, two eyes and one mouth. Use them in that order and that proportion.
Steven Covey put it another way: “Seek first to understand, then to be understood.”
In other words; we should listen more and talk less.

Let’s start with some Don’ts.

Don’t Debate. Have you ever tried to converse with someone who automatically contradicts what you are saying? It’s frustrating and debating is a form of a filter that prevents the complete message from getting through. It almost ensures that the mental pictures are not going to match. Listen closely before forming an opinion or counter-argument as Steven Covey suggests.

1) Ignoring. This is useful when children are playing and you are watching a game on TV. Should the noise stop for any reason; that is your cue to investigate why?

2) Pretending. Often used when the spouse is talking and you are thinking about the game. This is very dangerous as you might later find out that you agreed to visit the in-laws, when that was the last thing on your mind. Reread Steven Covey once more.

4) Attentive Listening. Now there is a good chance that the mental pictures will match, but it takes effort, as the mind has a tendency to want to slip back to one of the first three. Part of the reason for this is; we can speak up to 4 about 125 words per minute but understand up to 600 words per minute. An idle mind will fill the gap.

5) Empathic Listening. The highest level of listening that occurs when you are able to sense the emotions the speaker is feeling. These feelings may not even relate to the words being spoken. For example: you ask a fellow employee, “how’s it going?” and they reply “ok”. You sense right away that it’s not ok and find out that the person’s spouse has been diagnosed with cancer. Some people are very good at this; my mentor Gisele being one such person.

Now for some very important Dos

T – Is it True? Is what you are about to say really completely True? If not sure, don’t say it.

H – Is it Helpful? Hurtful words, once spoken cannot be retracted and build filters to further communication, while helpful words help break down filters and improve communication.

I – Is it Insightful? Is what you are about to say going to help in the other persons understanding? If you are not sure, take the time to reword it until it is.

K – Is it Kind? This is important if we are to reduce the filters that exist today. An unkind word can develop a lasting filter that may have major repercussions at a later date.

THINK what the world would be like if only everyone would THINK before speaking and ensure that the answer is yes to each of the questions.

There is a lot of information that, if used, will go a long way to reduce human errors due to Lack of Communication.

In the next article I thought we could take a break from the Dirty Dozen and look at the common characteristics of an AMT, AME, LAME or aircraft maintainer. Are we different from, say, the pilots or other occupations? Stay tuned and see.