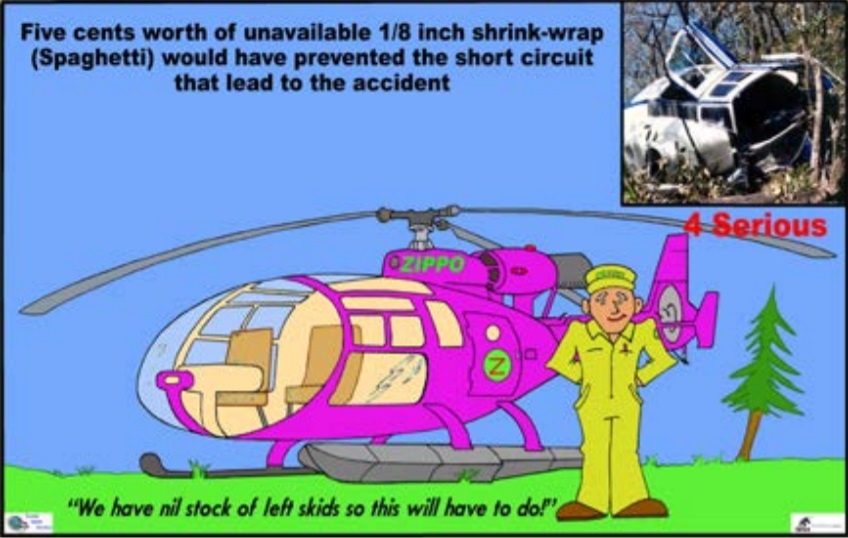 We AMT/AMEs are proud of being able to keep aircraft flying and we should rightfully be so. There is the old adage that: An AMT/AME is a person who can do more and more with less and less until he is fully qualified to do everything with absolutely nothing.” And he’s damn proud of it as well. While this may sound commendable, Lack of Resources has led to all too many accidents.

With the cost of aircraft parts what they are today, the Lack of Resources cause of maintenance error is always in the background and sometimes, unfortunately, in the forefront. But Lack of Resources is not just the lack of spare parts you would like to see in your stores. It is also the lack of: that manual for a propeller you work on; that special tool for torqueing the wing attach bolts; proper lighting in the work area; (a flashlight stuck between tubing is not proper lighting); shelter when the wind is blowing 40 kts. in a sleet-like rain; a hanger with heat when the outside and inside temperature is 40 below either scale, personnel for the work on hand and technical support when its needed. If you don’t have the answers, there should be someone you can turn to, be it the chief engineer, a wise engineer you know or a tech rep.

Let’s look at a case study that will illustrate the point.

The Piper Navajo was one of the more high time aircraft in the fleet but was generally well maintained. The crew had been complaining about a door “not closed” light coming on in flight but it always appeared to function OK when maintenance tried it on the ground. As the latches were worn it was decided to order new parts for the next 100 hourly and even though they were AOGed, (Aircraft on Ground) Piper was in Chapter 11 (a polite name for bankruptcy protection) and they had not arrived when the 100 hour rolled around. The aircraft was signed out as airworthy but the door light was coming on more regularly and now could be made to come on, on the ground if you pushed on the door.

Still no parts, the AME decided to remove the latches and file the securing screw holes so that the latches could be moved inward more. This “fix” appeared to work as pushing on the door would not cause the warning light to come on.
The aircraft departed with a full load of passengers and had just reached cruise altitude over the mountains when the warning light flickered a few times and stayed on. The Captain told the copilot to go back and check the handle to ensure that the door was fully closed.

Fortunately, just before he got there the upper latching door flew open and the heavier lower door with the stairs and a leather covered steel cable to pull it up to close tore off at the hinge and was swinging at the end of the steel cable in the slipstream. It was striking the empennage as it swung around making a sound that amplified up into the cabin. A lady sitting near the door became hysterical as the banging sound plus a 200 mph wind in her face lead her to believe that the end was near. The Captain swung the aircraft around as he declared an emergency and  pushed both throttles as far forward as they would go. The increased speed increased the slipstream and thus the thundering noise of the door striking the metal skin. From the ever increasing dent in the empennage began cracks that slowly started to circle the battered airframe. By the time a Safe landing was made with the aircraft still dragging the very much worse for wear door down the runway, the cracks had progressed almost 20% of the empennage circumference.

Had the incident occurred say 15 minutes later or perhaps even less, there would have been a fatal accident somewhere in the mountains with a burning wreckage minus its empennage.
There were no physical injuries but plenty of adrenaline was flowing in the persons in that aircraft that day and one can be sure that multiple lawsuits would follow..

A pilot who was flying single pilot cargo in the same type of aircraft on autopilot wasn’t as lucky when he went back to check the door and disappeared never to be found. Perhaps one day a hunter will notice a skeleton up in a tree and wonder
just how on earth it got there. The aircraft crashed an unknown time later out of fuel.

So what can we do about it? In this case, the latch was giving lots of warning that it needed replacement and should have been replaced even if it took calls around to locate new latches or even grounding the aircraft until a set was located and obtained. As for the AME who did what he thought best at the time to keep the aircraft flying, was fired by the company and received a 90 day license suspension by the regulatory body. Had the aircraft not made it back he could have been looking at a criminal negligence causing death charge.
When placed in a position of having to decide whether it is Safe to fly until a new part arrives; stop and think: “how many people will thank you if your decision is wrong.” A very common Lack of Resource is lighting which played a role along with a number of its teammates to cause the unthinkable, Aloha “convertible” accident to occur.

As I hope you will recall, (June 2016 issue) we said that complacency played a major role in the maintenance error that enabled the accident to occur. However, complacency had a number of accomplices under Lack of Resources. 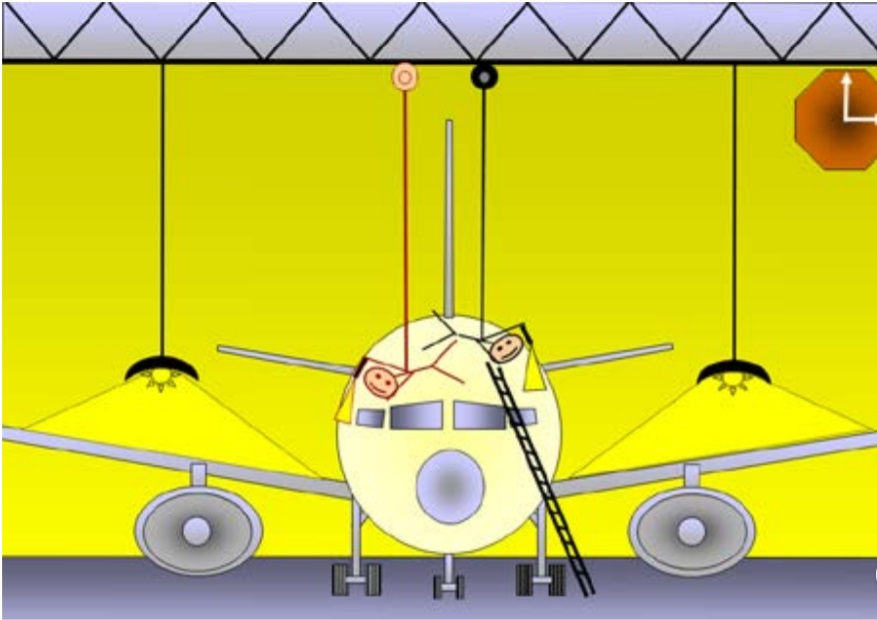 Starting with the lighting in the World War 2 built hangar. It was hung perfectly for the DC3 and like aircraft of the day but was too low to completely light up the much larger Boeing 737. The lights were never raised and wasn’t a major problem as most routine work occurs on the engines and landing gear. As “Murphy” would have it, the low light required that they use flashlights to look for cracks. The problem with flashlights is they provide a very focused beam of light over a small area and thus you lose the advantage of peripheral vision. Have you ever looked at something and seen nothing but as you turn away you see something that was there “out of the corner of your eye. Without getting into the rods  and cones in your eyes just remember that the peripheral is more powerful and if you are using a flashlight to see, the weaker direct vision will follow that light. The cracks were forming along the S-10 longeron above the windows on each side. The proper stand to go over the wing would have enabled them to look almost directly at the crack location. But that stand was in another hangar and would have involved pushing aircraft out to obtain and position the stand. Being ingenious AMTs they connected themselves in a harness attached to the rafters. Thus should they slip off it would stop them before hitting the hangar floor. See drawing. I suspect they did a great job inspecting the rivets on the top of the aircraft but as their head got below their butt, the odds are very high they speeded up the inspection of that area as the prospect of sliding down head first loomed. All this was occurring in the circadian rhythm low of 3 to 5 am when one’s “don’t care” attitude would be at its highest along with other negative fatigue symptoms. The links in the chain of events towards an accident were forming and they didn’t have a clue. Special tools make the job easier and in some cases, possible but who hasn’t made a tool to do a particular job? The question has to be: Am I 100% sure this tool will do the job?
If not, don’t use it.

A LAME (Australia) was servicing a Beechcraft model with electric gear and a spring that provided the tension to keep the gear over center lock locked. The inspection called for a special tool with a gauge to be used to push against the over center lock until a 020” feeler gauge could just be inserted into the unlocking gear. The gauge showed the acceptable range for this to occur. Not having this tool, he took a fish scale and attached a piece of angle metal to it and pulled on the scale until the feeler gauge fit it. Now any fisherman will attest to the accuracy of these gauges that enable them to have bigger bragging rights re fish weight than they are entitled to. Not too long after, the left gear collapsed on a rough gravel strip. Fortunately there was no fire from the leaking fuel but you can be sure you could have bought an awful lot of the “special tool” with the cost of the repair. The Safety net is the same as the materials one.
Our next article will cover a contributing factor that I’m very sure we have all experienced.