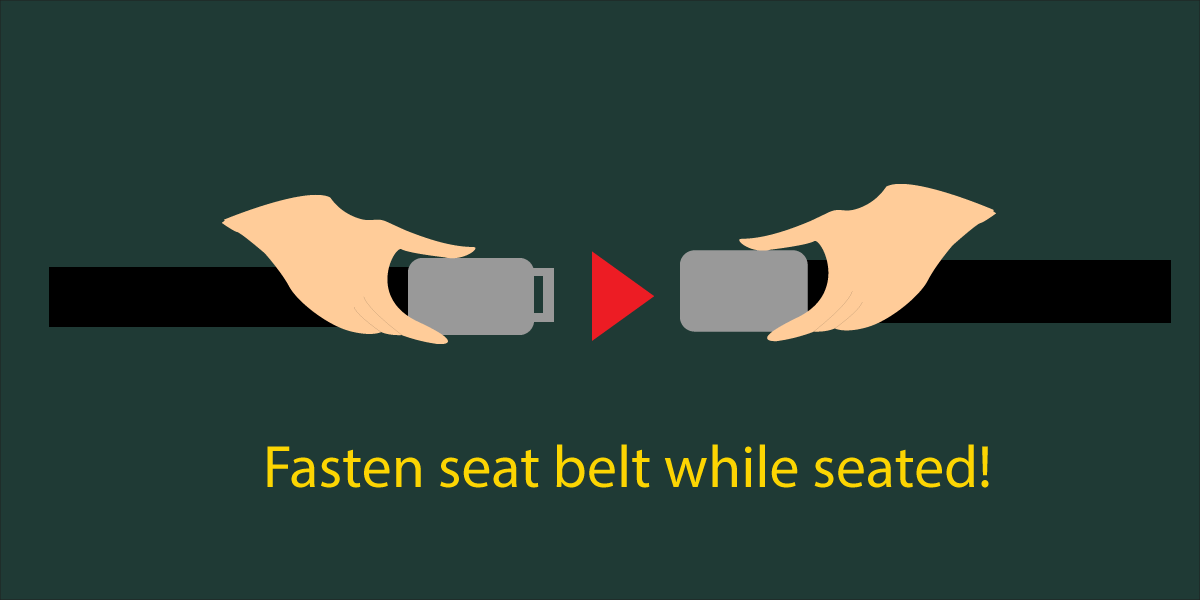 Seat belts are designed to ensure passenger safety and to reduce the risk of injury and they are much needed. Seat belts are the best protection for passengers in case of any sudden and unexpected movement of an airplane. Travelers are required to wear a seat belt on some phases of all flights. If for any reason a passenger refuses to fasten his seat belt, the flight crew will probably show him the door. On the other hand, there is a question why if most of us would never think to get in a car without buckling up why that habit is not present on board the airplane too? Here is everything you need to know about the airplane seat belts.

Seat belts, also known as safety belts, or restraints, are invented far before airplanes, or even cars. They have been patented for the first time in the U.S. in 1885. When it comes to airplane seat belts, they become common in airplanes by the 1930s and 1940s. In 1947, they were pushed back by the airline industry due to believing that a tight belt could cause internal damage in the case of the crash. Since this is very rarely true and negligible in comparison to the number of injuries that are caused when a passenger does not wear a seatbelt, they become standard by the Federal Aviation Act of 1958 that is codified in 1972.

Regulations determine the seat belt requirements on passenger airplanes. Although regulations can slightly vary in different parts of the world, they all have some rules in common:

During the turbulence the airplane experiences the sudden upward and downward movements which causes most of the injuries for passengers. Pilots receive information about turbulence from weather charts, radar returns, air traffic control and real-time reports from other airplanes. Despite, clear-air turbulence is usually impossible to detect with the naked eye and that it is difficult for aircraft pilots to detect and avoid it. Seat belts restrain the body movement when force is applied which prevents people from being thrown around the airplane into hard objects or other persons. Since turbulence cannot be 100% predicted, it is recommended, in the interest of safety, that seat belt is fastened whenever passengers are seated even if the fasten seat belt sign is off. According to FAA (Federal Aviation Administration) every year just in the U.S., approximately 58 people are injured by turbulence while not wearing seat belts. Furthermore, between 1980 and 2008, US air carriers had 298 serious injuries (184 flight attendants and 114 passengers) and 3 fatalities caused by turbulence. Two of the three fatalities involved passengers who were not wearing their seat belts while the seat belt sign was on. As you can see most of the people on board that are hurt by turbulence are flight attendants who tend to be up. Most common injuries are fractured or broken backs, legs, and feet, twisted or sprained ankles and bruises from hitting galley counters or carts.

Seat belt length can vary on airline and type of aircraft. In most cases, you can find out the information about seat belt length online, or by contacting your airline. This information is usually important for overweight passengers. By law, airlines can establish policies for overweight passengers. Since these passengers require an extra space it can be required to buy an extra ticket for the second seat in case they can’t meet certain criteria such as lowering armrests comfortably and fastening a seat belt with an extender. Some airlines, such as Air France offer a 25% discount for those who need an extra seat. Moreover, in KLM flights, not only you can get 25% on the second seat, but also you can apply for a refund of the costs of the second seat in case extra seats were available on the flight. In case the flight is sold out, and you cannot purchase the second seat, you can be denied boarding.

When it comes to seat extenders, every company has its own rules. Up to recently, overweight passengers could bring their own extender on the flight, but FAA declared that passengers must be able to buckle up using the original seat belt or with an extender offered by the airline if it is available. 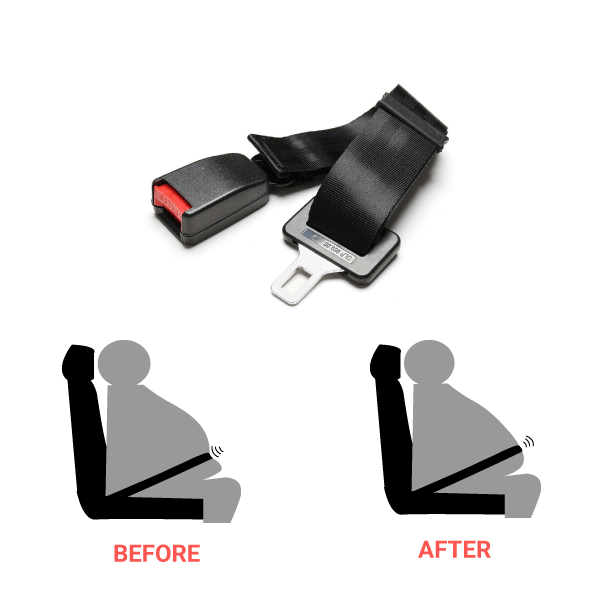 You may not know that there are several types of seatbelts, and their usage mainly depends on how many space between seats are in that part of the plane. The FAA’s regulations indicate that the more room you have, the more serious your seatbelts need to be. In an economy seat, the only thing you can hit is a seatback in front of you ( in case you fastened your seat belt), and it is about 23 centimetres away from your face, which doesn’t give you much room to accelerate and decreases your seat belts needs, so in this case lap belt is sufficient. In first class, you have more room and more danger, so in some planes the first class use three-point harness similar to the car ones. The safety harness consists of the seat belt and shoulder straps. For the pilot and crew, the needs are even more serious. A pilot has a lot of room to move around, and also a lot of things to press in the event of a crash or turbulence. Usually pilots have a five-point harness, similar to what you’d see in a race car’s cockpit. However, a three or five-point safety harness is not any safer than a lap belt in economy class. 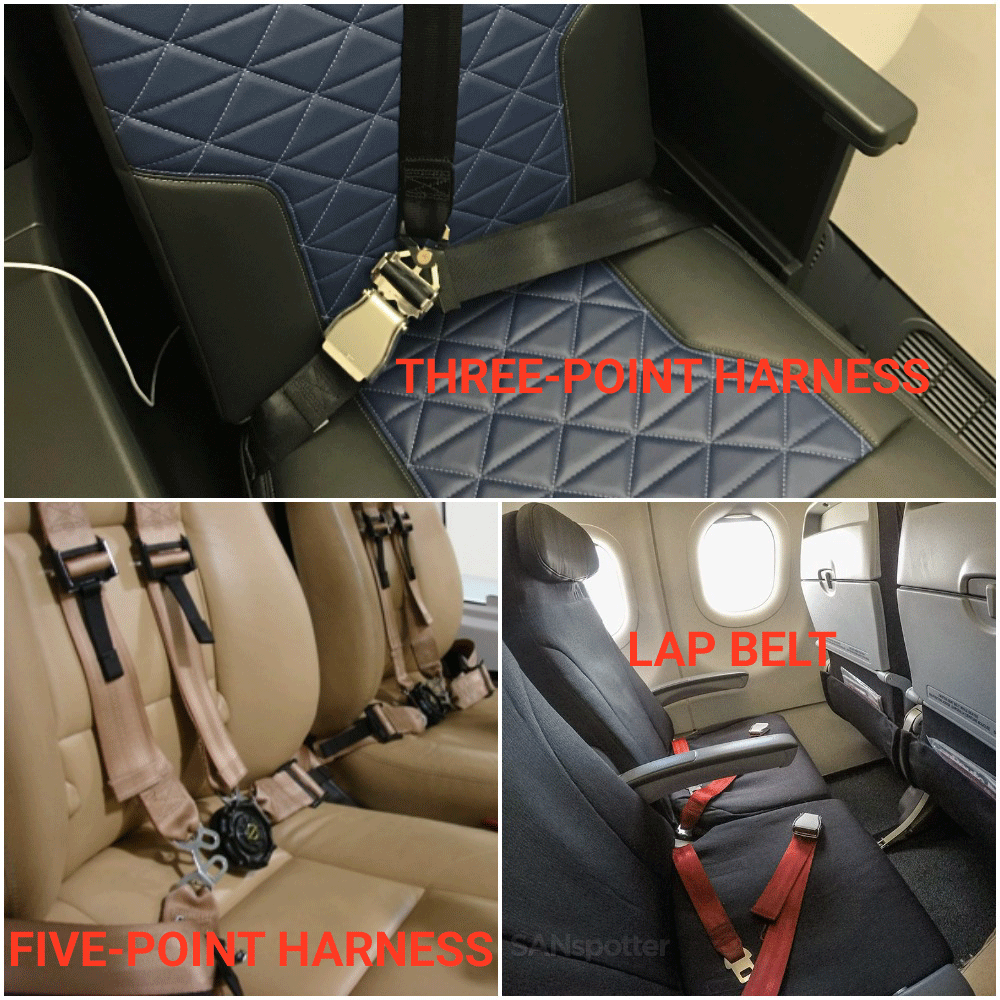 Why do you have to wear a seatbelt after the plane has landed?

The most common misconception connected to seat belts is that you can remove them once the airplane has landed. Ground operations are dangerous as same as air operations. Statistics show that most airplane incidents and accidents occur during takeoff and landing, such as during the taxi phase. Even if it is not that frequent, the risk that the pilot may need to bring the airplane to an immediate stop with no warning exists. For example, an airplane can collide with other vehicles, or even worse bust into the fire. In that situation you don’t want all passengers to start panicking, picking their stuff and blocking the emergency exit, like in the case of the Aeroflot aircraft fire emergency in Moscow (Does a personal luggage worth more than a human life?)   Therefore, seatbelts should be fastened as instructed until the signs have been switched off.

Some people believe that being fastened will slow you down in need of evacuation. The fact is the only way you will be slow down is if you are hurt during turbulence because you did not have your seat belt on. Using the seat belt is the one on the rare things you can do to protect yourself as a passenger when it comes to aviation. Using the seat belt and observing and obeying the fasten seat belt sign is a key safety precaution. Since turbulence is not always easy to predict, make sure you are fastened on your seat, as much it is possible. Also, listen to the safety demo at the beginning of the flight to remind yourself how to behave properly when it comes to safety.